A US delegation’s visit to Ankara as part of a probe into Fetullah Terrorist Organisation (FETO) will lead to further developments in the case, Turkish justice minister said on Saturday.

Speaking to the reporters in Ankara, Abdulhamit Gul said FETO has been proven a terrorist group and "US acknowledgment in this regard is important."

A US delegation including FBI officials arrived in the Turkish capital on Thursday to discuss developments in US probe into FETO, the group behind the 2016 defeated coup attempt in Turkey.

Turkish justice minister said the US authorities in Ankara requested to see some digital data on FETO's link to the deadly coup attempt.

Gul said Turkey was ready to provide all necessary documents to the US  for its investigation into the FETO terrorist organisation.

Two prosecutors, one from New York and one from Washington, came to Turkey, Gul said and added: "They saw [the evidence] by themselves and asked questions."

"It was like if everything happened in front of the eyes of a prosecutor in New York."

"So, I think after what the US delegation witnessed, the US investigation [into FETO] will give way to different developments," Gul said.

The justice minister said the US  judicial authorities' visit to Ankara was “important” as it is proven that Turkey conducts a fair trial and there was evidence to reach a conclusion.

Gul said the case about FETO leader's extradition was a separate issue , however, US judicial authorities' conclusion would have positive effects on it as well.

Justice minister said a total of 3,908 prosecutors and judges were sacked and 31,088 people were remanded or jailed due to their links to the FETO terror group.

FETO and its US-based leader Fetullah Gulen orchestrated the defeated coup of July 15, 2016 in Turkey, which left 251 people killed and nearly 2,200 injured.

FETO is behind a long-running campaign to overthrow the state through the infiltration of Turkish institutions, including the military, police, and the judiciary. 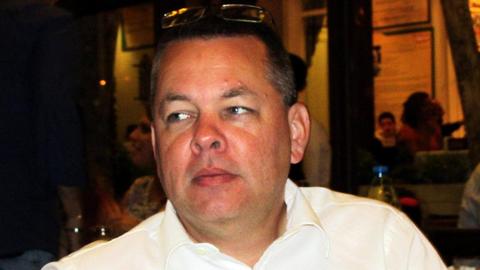 What’s the latest in the trial of US pastor Brunson?