Armoured vehicles and commando units reached border province of Sanliurfa following statements from Turkey's leaders that Ankara might launch a third counter-terror operation into Syria following two successful ones since 2016.

Turkey sent military reinforcements to its southern Sanliurfa province late on Tuesday, according to Anadolu Agency reporters on the ground.

A 12-vehicle military convoy, including armoured vehicles carrying commando units and buses, arrived in the province's Ceylanpinar district as part of Turkey's recent military reinforcements along the border with Syria.

Turkey's leaders have said Ankara might launch a third counter-terror operation into Syria following two successful ones since 2016.

In its more than 30-year terror campaign against Turkey, the PKK – listed as a terrorist organisation by Turkey, the US and the EU – has been responsible for the deaths of 40,000 people, including women, children and infants. The YPG is the Syrian branch of the PKK terrorist group.

In 2017, the US, which considers the PKK a terrorist group, helped change the YPG’s name to the Syrian Democratic Forces (SDF) in order to dissociate it from the PKK. 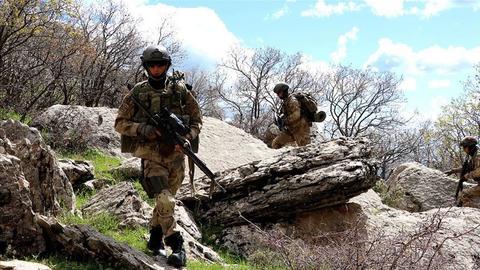