Turkey’s Justice Ministry requests extradition of Mazloum Kobani, also known as Ferhad Abdi Sahin, under the Treaty on Extradition and Mutual Assistance in Criminal Matters between the US and Turkey.

Turkey’s Justice Ministry said in a statement on Monday it conveyed a letter of an extradition request to the Foreign Ministry to be sent to the US for the arrest of YPG/PKK terrorist Ferhat Abdi Sahin.

The extradition request came after a red notice was issued for Sahin, code-named Mazloum Kobani.

In Turkey’s request, Sahin is charged with “founding and masterminding an armed terrorist organisation” and “disrupting the unity and territorial integrity of the state.”

The extradition request was issued in accordance with the provisions of the “Treaty on Extradition and Mutual Assistance in Criminal Matters between the US and Turkey.”

Turkey’s Foreign Ministry had previously submitted a request to the US authorities to arrest Sahin if he enters US soil.

Earlier this week, US Senators Lindsey Graham and Chris Van Hollen asked the US State Department to issue Sahin a visa so he could visit Washington.

US President Donald Trump had previously said on Twitter that he anticipated a meeting with Sahin.

This was criticised by senior Turkish officials, who said that since Sahin is a wanted terrorist, he should receive treatment in line with Ankara’s agreements with Washington.

Turkish Justice Minister Abdulhamit Gul said on Friday that President Recep Tayyip Erdogan would contact US officials for the terrorist’s extradition if he were to set foot on US soil.

Sahin is the chieftain of YPG, which is the Syrian branch of the PKK.

In its more than 30-year terror campaign against Turkey, the PKK — listed as a terrorist organisation by Turkey, the US and the European Union — has been responsible for deaths of 40,000 people, including women, children and infants. 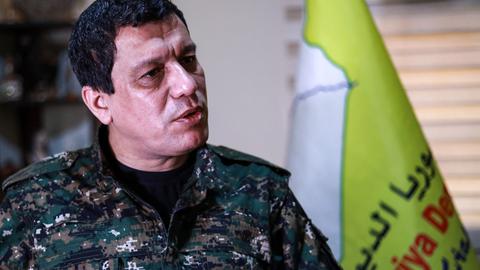