Turkish President Tayyip Erdogan on Wednesday told US Secretary of Defence James Mattis that Turkey felt uneasy over US support for YPG in Syria.

US Defense Secretary James Mattis on Wednesday arrived in Turkey’s capital of Ankara to hold talks with Turkish officials, focusing on Washington's arming of the YPG, a move which has strained ties between the NATO allies.

Mattis would "emphasise the steadfast commitment of the United States to Turkey as a NATO ally and strategic partner, seek to collaborate on efforts to advance regional stability, and look for ways to help Turkey address its legitimate security concerns - including the fight against the PKK," Pentagon said in a statement before the trip.

In a statement following meetings between Mattis and Turkish officials, sources said the two sides emphasised the importance of maintaining the territorial integrity of Syria and Iraq, as Kurdish northern Iraq gears up for an independence referendum in September.

Both Turkey and the United States have voiced concerns over the referendum, with the former's Foreign Minister, Mevlut Cavusoglu, saying earlier on Wednesday he would ask Iraqi Kurdish leader Masoud Barzani to cancel it.

The visit is also part of an effort to address concerns about the fight against Daesh and give a message that Washington will not tolerate Russia's annexation of eastern Ukraine.

He flew in for the one-day visit after stopping in Iraq to review progress in the campaign against Daesh, urging coalition partners to prevent other political issues from disrupting the growing momentum against the terrorists.

Turkey, an important NATO ally of the US and part of the coalition fighting Daesh, is angry that Washington has been arming the YPG in the assault on Daesh's stronghold of Raqqa, in northern Syria.

Turkey considers the YPG to be the Syrian branch of the PKK which has been labeled a terrorist organisation by the US, the EU and Turkey.

In May, the Pentagon said it had begun transferring small arms and vehicles to the YPG to support its role as a leading player in the Syrian Democratic Forces (SDF), a Kurdish-Syrian Arab alliance fighting Daesh.

The US acknowledges the ties between the PKK and the YPG, but it sees the group as a key partner in the fight against Daesh in Syria.

The US has been sending hundreds of trucks full of weapons, ammunitions and heavy artillery to the YPG under the pretext of fighting Daesh with heavy criticism from Turkey.

Ankara says the weapons being sent to the YPG will eventually find its way to the PKK and be used against its security forces as well as the civilian population in the southeast.

Washington has said it will control the distribution of the weapons but some have already found their way into the hands of PKK via YPG in Syria. 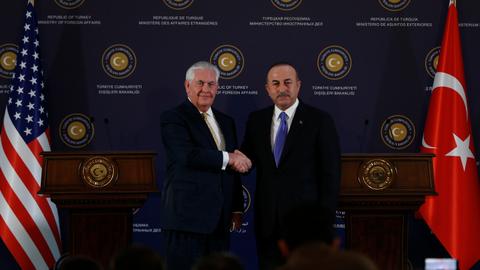