Qatar procured one hundred Altay tanks for use in its military. What's unique about the tank and what sets it apart from the rest?

Turkey and Qatar inked a deal on Tuesday to purchase 100 of Turkey's first main battle tank, the Altay.

Ali Ihsan Yavuz, Vice Chairman of the Justice and Development Party said that the agreement would see up to 40 of the fourth generation tanks delivered to Qatar in the first phase of procurement.

The Altay was first unveiled at a 2011 defence show in Istanbul, going on to win a production contract from Turkey's Presidency of Defense Industries (SSB) and domestic armoured vehicle manufacturer BMC in November 2018. Its production involved cutting-edge development by leading defence companies such as Aselsan, Havelsan, as well as the Machinery and Chemical Industry Institute (MKEK).

What's unique about the tank?

Named after Army Gen. Fahrettin Altay, who commanded the Fifth Cavalry Corps during the Turkish War of Independence, the Altay was designed to surpass other main battle tanks in use around the world through a heavy emphasis on mobility, first-rate firepower and rugged durability.

The Altay is equipped with a 120mm 55 calibre smoothbore gun, putting it in the top tier for tank accuracy, further supplemented by a next-generation fire control system increases the accuracy of fire towards moving target, as well as a state of the art battlefield management system developed by Aselsan.

Its target acquisition system can use a panoramic view with a thermal vision to find targets. Once a target is selected by the tank's commander, the cannon turns to the target automatically, with the gunner completing the aiming and firing procedure. During this time, the Altay's commander can identify the tank's next target.

Other features of the tank include a 360-degree awareness and laser defence system called the PULAT, that can be used to shoot down guided automatically and unguided anti-tank missiles, or offensively.

The PULAT is designed to operate in demanding environments and uses a radar to automatically eliminate incoming projectiles through dust, mud, snow and rain.

It can also be integrated into larger battlespace command networks, for faster reaction times.

The tank also features a 12.7 mm heavy remote-controlled machine gun turret, as well as a 7.62 mm machine gun for use in urban areas and laying down fire support.

It's distinctive 1800 horsepower engine ensures it a speed of 70 km/h, while also allowing it to move underwater at a depth of 4.1 meters.

The tank's armour is a modular reactive composite, that can be easily replaced, reducing repair times during action, while also reacting with outward chemical force against incoming projectiles. The tank is designed to resist chemical, biological and radiological (CBR) attacks.

In light of its 2023 vision for advancing defence technology and capacity, Turkey has increased arms exports by 170 percent over four years, according to SIPRI.

Turkey's development of its military technology and defence capacity falls under a national development scheme dubbed the 2023 Vision, named after the 100th anniversary of the establishment of the modern republic.

Two Turkish companies, Aselsan and Turkish Aerospace Industries were listed in the top 100 world arms-producing and military service companies, according to SIPRI’s 2017 ranking.

Having made a name for itself, Turkish defence offerings are increasingly attractive deals for countries around the world, promising state-of-the-art firepower and reliability. 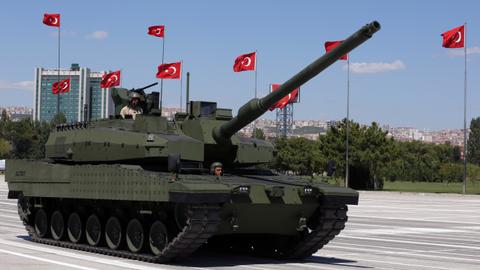