Suspected militiamen killed nine civilians in a fresh attack in the Democratic Republic of Congo's troubled east, government officials and the military said on Tuesday.

The assailants were suspected members of the Allied Democratic Forces (or ADF), an armed group blamed for hundreds of killings since 2014.

"They entered Oicha late at night, they pillaged and made off with farm animals. We lost nine people in the attack," Kibwana said.

The toll was confirmed separately by military spokesman Mak Hazukay.

"The ADF got around our position and carried out their dirty work in eastern Oicha... there are nine civilians dead," he said.

"I fled when they got in my house. I saw the bodies of nine inhabitants this morning."

The ADF arose in western Uganda in 1995 under the leadership of Jamil Mukul.

Forced out of Uganda, it operates in the border area in the DR Congo's North Kivu province, an area where other armed groups are also active.

It has been blamed for recruiting and using child soldiers, killing hundreds of civilians since 2014, as well as 15 Tanzanian peacekeepers who died in an attack in December 2017.

In the past month, 47 deaths in Beni have been attributed to the ADF, including seven UN peacekeepers who were killed in an operation against the group, according to an AFP toll.

The violence has cast a shadow over efforts to roll back an outbreak of Ebola in eastern DR Congo and could hamstring efforts to hold presidential and legislative elections in the region on December 23, the UN says.

DR Congo's army launched its latest offensive in January this year against the ADF. 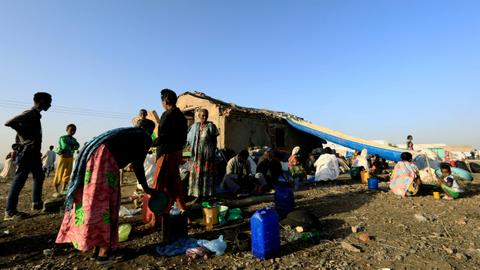