Eastern city of Beni has become a new epicentre of the Ebola outbreak as out of 120 confirmed cases, at least 30 are under 10-years-old, and 27 of them have died there, health ministry data showed.

Children in eastern Democratic Republic of Congo are dying from Ebola at an unprecedented rate due largely to poor sanitary practices at clinics run by traditional healers, the health ministry said on Sunday.

The impact on children has been felt acutely in the city of Beni, which has emerged as the outbreak's new epicentre.

Of 120 confirmed Ebola cases in Beni, at least 30 are under 10-years-old, and 27 of them have died, according to health ministry data.

Many children affected by an unrelated malaria outbreak near Beni are thought to have contracted Ebola at clinics run by traditional healers who have also treated Ebola patients, said Jessica Ilunga, a spokeswoman for the health ministry.

"There is an abnormally high number of children who have contracted and died of Ebola in Beni. Normally, in every Ebola epidemic, children are not as affected,” Ilunga told Reuters.

"Traditional healers use the same tools to treat everyone. And the child who has entered a traditional healer's clinic with malaria comes out with Ebola and dies several days later," she said.

The rate of new cases in eastern Congo has accelerated in recent weeks. An emergency World Health Organization committee said earlier this month that the outbreak was likely to worsen significantly unless the response was stepped up.

The health ministry reported nine new confirmed cases late on Saturday — seven in Beni and two in the city of Butembo — the biggest one-day day jump since the outbreak was declared on Aug. 1.

The haemorrhage fever is believed to have killed 168 people and infected another 98 in North Kivu and Ituri provinces, where attacks by armed groups and community resistance to health officials have complicated the response.

Congo has suffered 10 Ebola outbreaks since the virus was discovered near its eponymous Ebola River in 1976. The current one now ranks third in terms of number of confirmed cases. 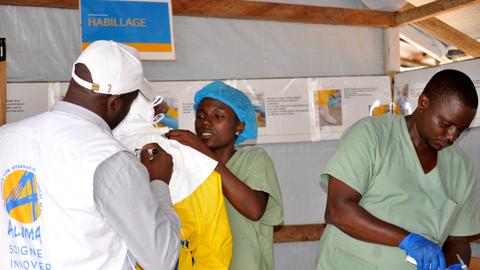