The courts may have agreed with Kenya's opposition that there were problems with the election and ordered a rerun. But this poll may too be scuppered if concerns in a leaked memo are not addressed.

History was made in Kenya on September 1 when the country’s Supreme Court annulled the recent elections that saw President Uhuru Kenyatta sweep back into office for a second term.

What made the ruling all the more stunning was that all and sundry had declared the August 8 election to be free and fair, including a host of international observers led by former US Secretary of State John Kerry.

The run up to the elections started off on an ominous note with the abduction and killing of the IT chief of Kenya’s Independent Electoral and Boundaries Commission (IEBC). The body of Chris Msando and an unidentified woman were found in the town of Kikuyu, which borders the capital city of Nairobi.

Wafula Chebukati, the IEBC chairman said that there was no doubt that Msando, who was responsible for the voting system, had been tortured. There were some reports that his arm had been cut off, while others indicated that he had died a painful death.

The death of Msando cast a shadow over the whole election and even before the results were announced on August the opposition was crying foul.

According to those results, Raila Odinga and his National Super Alliance came up short, winning only 44.47 percent of the votes to the 54.27 percent that was cast in favour of Kenyatta.

Odinga and his supporters claimed that the election had been hacked – an allegation that Chebukati strenuously denied.

While not saying that there was any fraud, the Supreme Court agreed that there were major irregularities that justified annulling the August 8 poll and ordering a new poll.

This poll will take place on October 17, but Odinga has questioned how it can take place under the management of the very same people who had led to its outcome being overturned.

At the centre of the current dispute is the chief executive of the IEBC, Ezra Chiloba. The opposition want him sacked and blame him for the election irregularities that led to the annulment of the election.

But it is the leaking of an internal IEBC memo on September 5 from Chebukati to Chiloba that has really set the cat among the pidgeons. It gives a major insight into what went wrong in the election.

Leaked MEMO from CHEBUKATI to CHILOBA literary telling us that CHILOBA rigged this election in its entirety without CHEBUKATI. BOOM! pic.twitter.com/BK5kwtoIZ5

Chebukati further questions the creation of a username and password that were created in his name without his knowledge and used to “undertake over 9,934” transactions on the computer system. The memo does not reveal what these transactions were or how they affected the outcome.

One of the biggest issues that the Odinga camp had complained about was the tally of presidential votes on the 34A forms did not tally with the figures issued by the IEBC. Each polling station was required to submit a 34A form with results signed by the party agents, who keep a copy of the forms.

It is from these forms that Odinga claims he has calculated that he won 8.1 million votes against 7.2 million for Kenyatta.

And certainly, Chebukati’s memo appears to agree that there was a problem, as the results of 10,366 polling stations were transmitted to the IEBC offices in Nairobi in text format without scanned copies of the 34A form. That is nearly a quarter of all polling booths affecting some 4.6 million registered voters.

Among several other issues that are raised, Chebukati asks Chiloba to explain the use of an insecure file server used to transmit forms; why new satellite phones bought for remote areas to transmit results were never used; whether new printing and scanning machines were used, and why GPRS features of the election computer system, known as the Kenya Integrated Election Management System or KIEMS, which determine location, were switched off during the election.

It is not clear whether Chiloba responded to the memo but, within days, five members of the board issued a statement saying that the first they had heard of the issues was when the memo was leaked, and distanced themselves from it.

Odinga has said that there will be no election on October 17 if those responsible for the failings of the August 8 poll are not removed, in particular Chiloba.

Odinga has stood for election three times and lost. And all three times he has claimed the elections were rigged.

We wish to clearly state that there shall be no elections without reforms at the IEBC. We shall not partake in another shambolic exercise. pic.twitter.com/ooYHBwKY8W

On Tuesday, Kenyatta opened the country's parliament despite an opposition boycott. They claimed that, with the court ruling overturning the August 8 results, he was not the president of the country and therefore did not have authority to open parliament.

It was a fact that he disputed, telling lawmakers: "The set term of a president is embedded until a new one is sworn in as per the constitution."

"I want to assure every Kenyan and the world that every arm of government is in place and operational," he added.

In the wake of the August 8 poll, more than 20 people were killed in the ensuing violence. On Tuesday, riots erupted in the opposition stronghold of Kisumu city after a rumour spread about alleged efforts to rig the October 17 election.

How Kenya resolves the impasse over the IECB will no doubt determine how or if indeed the October 17 poll will even be held. 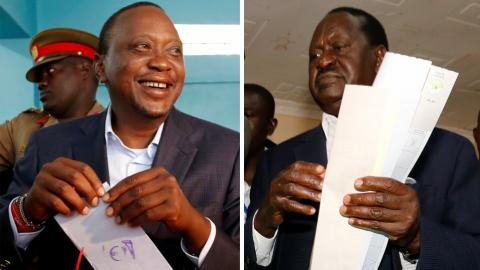