Nigerian authorities have said that the killing of 23 people returning from a Muslim festival in the African country was a premeditated ambush for which suspects have already been arrested.

In a statement, President Muhammadu Buhari on Sunday condemned Saturday's ambush in central Plateau state buses returning from a religious festival in nearby Bauchi state.

'Christian militia was to blame'

Though details of the attack in state capital Jos were unclear, some media suggested a Christian militia was to blame.

"It is clear this was a well-conceived and prearranged assault on a known target, location and religious persuasion of the travellers, not an opportunist ambush," Buhari said.

"A direct, brazen and wickedly motivated attack on members of a community exercising their rights to travel freely and to follow the faith of their choosing."

Plateau state governor Simon Lalong said security agencies had arrested 20 suspects and imposed a 6 AM-6 PM curfew in the area due to fear of reprisals.

"This is purely a criminal conduct and should not be given any ethnic or religious colouration," he said.

Nigeria has been plagued by violence in recent years: conflicts between farmers and cattle herders have killed thousands, while a 12-year war against militants has led to an estimated 350,000 deaths. 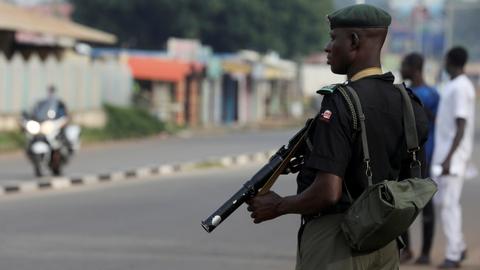