The opposition has threatened to boycott the October 26 re-run if election board officials are not removed and if parliament passes a bill that takes power to annul unfair elections away from the Supreme Court.

Police fired tear gas on Friday at opposition protesters in Kenya's capital who were demanding that officials involved in August's cancelled presidential election be sacked.

Crowds had gathered in Nairobi, the port of Mombasa and Kisumu, the western stronghold of the opposition, for the second time this week.

The opposition is threatening to boycott the October 26 re-run if election board officials are not removed and if parliament passes a proposed amendment to the election law.

The amendment could prevent the Supreme Court from annulling the results on procedural grounds again.

Parliamentarians return from recess next week and may pass the bill then, an action likely to spark further protests from the opposition.

Last month, Kenya’s Supreme Court voided the August 8 presidential election, citing irregularities, but did not criticise any specific individual at the election board .

President Uhuru Kenyatta, who officially won by 1.4 million votes, only to have his victory annulled, has accused the Supreme Court of bringing the country close to "judicial chaos".

Opposition leader Raila Odinga and his supporters have turned their ire on the election board for its role in the cancelled poll.

With three weeks to go until a scheduled new election, politicians from both sides have traded insults and accusations, raising fears of further turmoil in Kenya, a transport and economic hub for East Africa.

The United States, a major donor to the Kenyan government and its security forces, also reacted to the expected vote next week as it issued a sharply worded statement on Friday.

"Changing electoral laws without broad agreement just prior to a poll is not consistent with international best practice (and) increases political tension," it said.

It said that all sides have undermined the electoral board in recent weeks and "stoked tensions." 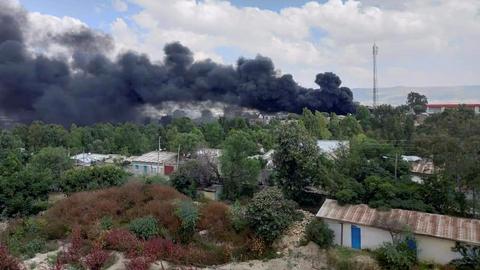