Kenya's president-elect, William Ruto, has called for unity to move the country forward despite his main rival's rejection of the recent election outcome.

Kenya's president-elect William Ruto has urged the country's top court to throw out a petition by his rival Raila Odinga that challenged the result of the August 9 election.

Odinga, a veteran opposition leader who ran with the backing of President Uhuru Kenyatta and the ruling party, filed a petition to the Supreme Court on Monday, contesting the poll's outcome that delivered victory to Ruto.

The 77-year-old politician lost his fifth bid for the presidency by a narrow margin of around 230,000 votes — less than two percentage points — and said he had "enough evidence" to show that he had, in fact, won the election.

Since 2002, no presidential election outcome in Kenya has gone uncontested, and Odinga has previously said he was cheated of victory in the 2007, 2013 and 2017 polls.

Although polling day passed off peacefully, the announcement of the results last week sparked angry protests in some Odinga strongholds and there are fears a drawn-out dispute may lead to violence in a country with a history of post-poll unrest.

In an affidavit to the court, Ruto said Odinga had a history "of consistently disputing presidential election results and fomenting national crises after losing".

He accused the former prime minister of trying "to have another bite at the cherry through a judicially-forced re-run".

According to a copy of the 72-page petition seen by AFP news agency, Odinga's team alleges that the chairperson of the Independent Electoral and Boundaries Commission, Wafula Chebukati, failed to tally around 140,000 votes.

As a result, Ruto "did not meet the constitutional threshold of 50 percent plus 1 of the valid votes cast" — a requirement for him to be declared the winner.

Judges have to issue a ruling by September 5. If they order an annulment, a new vote must be held within 60 days.

Ruto said it was "against the public interest to keep the country in a perpetual electioneering mode", arguing that the uncertainty would further damage Kenya's troubled economy which is already battling high inflation.

The IEBC was under heavy pressure to deliver a clean vote after facing sharp criticism over its handling of the August 2017 election, which was also challenged by Odinga.

The court annulled that election in a first for Africa and ordered a re-run which was boycotted by Odinga. Dozens of people died during a police crackdown on protests.

On the campaign trail, both frontrunners pledged to resolve any disputes in court rather than on the streets. 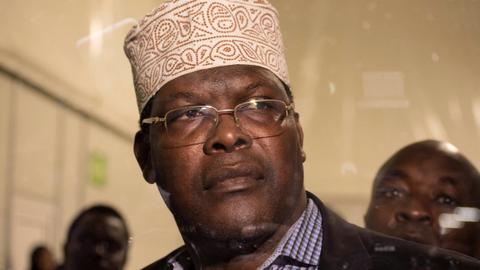