Mike Pompeo, who flew to Khartoum on the historic "first official non-stop flight" from Tel Aviv, is the first US Secretary of State to visit Sudan since Condoleezza Rice went there in 2005.

Sudan has said it cannot form diplomatic relations with Israel now, dashing hopes for a speedy breakthrough during a visit by US Secretary of State Mike Pompeo on Tuesday.

Prime Minister Abdalla Hamdok told Pompeo that Sudan's transitional government, which replaced ousted strongman Omar Al Bashir last year and is set to rule until 2022 elections, has "no mandate" to take such a weighty step.

The announcement was a setback to a charm offensive by the US and Israel to forge more ties between the Jewish state and the Arab world following a landmark US-brokered August 13 agreement between Israel and the United Arab Emirates.

READ MORE: Scandalous liaison: After the UAE, who is next to forge ties with Israel?

Israel remains technically at war with Sudan, an East African country which for years supported hardline militant forces under its former strongman Bashir, and which remains on a State Department blacklist of backers of terrorism.

Hamdok also urged the US not to link "the subject of lifting Sudan from the State Sponsors of Terrorism list and the subject of normalisation with Israel," his spokesman said.

The coalition which led Sudan's protest movement, the Forces of Freedom and Change, had also argued earlier that the government has "no mandate" to normalise ties with Israel, noting "the right of Palestinians to their land and to a free and dignified life".

Hamdok's office said he had made the same point to Pompeo, the first US Secretary of State to visit Sudan since Condoleezza Rice went there in 2005.

READ MORE: The backstory of the Sudan-Israel rapprochement

Great to be in Khartoum for meetings with the civilian-led transitional government. The democratic transition underway is a once in a generation opportunity for the people of Sudan. Looking forward to discussing how to deepen the U.S.-Sudan relationship. pic.twitter.com/krfKxt3tyS

"The prime minister clarified that the transitional period in Sudan is being led by a wide alliance with a specific agenda, to complete the transition, achieve peace and stability in the country and hold free elections," government spokesman Faisal Saleh said.

Hamdok had told Pompeo that his interim government "does not have a mandate beyond these tasks or to decide on normalisation with Israel".

READ MORE: Sudan made no promises to 'normalising ties' with Israel

When Pompeo arrived hours earlier, he tweeted the fact that he had flown to Khartoum on a historic "first official non-stop flight" from Tel Aviv.

Sudan doesn’t have diplomatic relations with Israel.
Last March, Sudan allowed Israeli planes to fly over its airspace but did not allow planes coming from Israel to land on its soil.

Happy to announce that we are on the FIRST official NONSTOP flight from Israel to Sudan! pic.twitter.com/eOXNsBAozC

The US top diplomat also met Sudan's Sovereign Council chief General Abdel Fattah Al Burhan for talks which the State Department had said would express US "support for deepening the Sudan-Israel relationship".

According to the official Sudanese news agency SUNA, the normalisation between Sudan and Israel will be on Pompeo’s agenda during the visit.

Netanyahu had met Burhan in February in Uganda and later announced that the two leaders had agreed to cooperate towards normalising ties. Sudan's cabinet however later denied that Burhan had made such a promise.

The cash-strapped country hopes Washington will soon take it off its terrorism blacklist as it seeks to fully re-integrate into the international community and attract more aid and investment to rescue its crisis-hit economy.

Sudan has been on Washington's terror list since 1993 because of its earlier support for militants.

Sudan has been in talks on compensating the victims of Bashir-era Al Qaeda attacks, including the 2000 USS Cole bombing in Yemen and the simultaneous 1998 bombings of the US embassies in Kenya and Tanzania.

Hamdok wrote on Twitter that he and Pompeo had a "direct & transparent conversation regarding delisting Sudan" from the terror list and on receiving US government support.

Great meeting with @SecPompeo, we had direct & transparent conversation regarding delisting Sudan of #SSTL, bilateral relations & US government support to the CLTG.
I continue to look forward to positive tangible steps in supporting the glorious Sudanese revolution. pic.twitter.com/BiXOcZhGmk

Pompeo's visit came as Sudan faces a deep economic crisis, laid low by long years of US sanctions and the 2011 secession of the oil-rich south.

Bashir is on trial over the militant-backed coup that brought him to power over three decades ago, and the transitional government is at pains to distance itself from his legacy.

It has agreed in principle to hand Bashir over to the International Criminal Court in The Hague where he faces charges of genocide, war crimes and crimes against humanity for his role in the Darfur conflict.

Conflict broke out in the vast western region in 2003 when ethnic minority rebels staged an uprising against the government, citing marginalisation and discrimination.

Hamdok has made finding a peace deal with rebel groups a priority, in order to bring stability to restive regions that also include Blue Nile and South Kordofan. 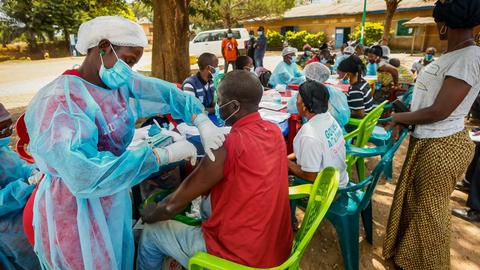