Denying a coup, the military says it seized power targeting "criminals" around President Robert Mugabe, adding that the 93-year-old leader and his family were "safe and sound." Mugabe is reportedly confined to his home.

Zimbabwe’s army said on Wednesday it had taken President Robert Mugabe and his wife into custody and are currently securing government offices and patrolling the capital’s streets following a night of unrest that included a military takeover of the state broadcaster.

According to reports, Mugabe and his wife are under house arrest at their mansion in the Harare suburb of Borrowdale.

The night’s action triggered speculation of a coup, but the military’s supporters praised it as a “bloodless correction.”

Armed soldiers in armoured personnel carriers stationed themselves at key points in Harare, while  Zimbabweans formed long lines at banks in order to draw the limited cash available, a routine chore in the country’s ongoing financial crisis.

People looked at their phones to read about the army takeover and others went to work or to shops.

A journalist in Harare, speaking to TRT World on condition of anonymity said, "The Zimbabwe National Army has closed President Robert Mugabe’s Munhumutapa offices and arrested members of the Central Intelligence Organisation (CIOs) manning the government premises at gun point."

"Armed soldiers were seen on Wednesday morning after raiding President Mugabe’s offices ordering and escorting all the members of the CIO to the parliament building at gun point."

"They also took everyone, including cleaners, out of the building as they were searching  for unnamed government ministers who they said they wanted to arrest," he said.

He said that TV and radio stations, which on Tuesday night were only broadcasting "traditional music and patriotic songs" appeared to have returned to normal broadcasting schedules.

The country's main state-owned newspaper, the Zimbabwe Herald published a special edition with the headline across its front page reading: "No Military Takeover: ZDF."

Mnangagwa back in Zimbabwe

Over two tweets, he praised the army intervention and said it would lead the way to elections.

He added that he will be busy over the next few days.

Mnangagwa, also known as “The Crocodile” was sacked last week amid a row over leadership in the Mugabe's ruling Zanu-PF party.

Today 15/11/17, we salute & applaud the bravery of our ZDF who decisively rejected desperate last minute concessions by an Executive whose sole objective was to create a family dynasty.
An Army led transitional phase will now pave way for a peaceful, free&fair democratic election

Zimbabweans stay calm &remain tuned to national news.
I'm back in the Country &will be quite busy over the next few days. My communication​ with you will now be via formal broadcasting channels so I'm unlikely to use the twitter handle. Thank you all for the support & solidarity

Overnight, at least three explosions were heard in the capital, Harare, and military vehicles were seen in the streets.

The military also detained Finance Minister Ignatius Chombo along with other officials on Wednesday, a government source said.

Chombo was a leading member of the so-called G40 faction of the ruling ZANU-PF party, led by Mugabe's wife Grace, that had been vying to succeed Mugabe.

The military actions have put the army in control of the country.

Army commander Constantino Chiwenga had threatened on Monday to “step in” to calm political tensions.

Mugabe’s ruling ZANU-PF party responded by accusing the general of “treasonable conduct.” But now Chiwenga appears to be in control.

The army has been praised by the nation’s war veterans for carrying out “a bloodless correction of gross abuse of power.”

The military will return Zimbabwe to “genuine democracy” and make the country a “modern model nation,” said Chris Mutsvangwa, chairman of the war veterans’ association said.

Mutsvangwa and the war veterans are staunch allies of Mnangagwa, who was fired from his post of vice president by Mugabe last week. Mnangagwa fled Zimbabwe last week but said he would return to lead the country.

The US ambassador in Zimbabwe has instructed all employees to remain home on Wednesday due to "ongoing political uncertainty," the embassy said in a statement on its website amid speculation about a coup.

"US citizens in Zimbabwe are encouraged to shelter in place until further notice," the statement said, adding the embassy would be closed to the public on Wednesday.

The UK government on Wednesday also advised its citizens currently in Harare to remain indoors until the political situation becomes clearer in the African country.

"Due to the uncertain political situation in Harare, including reports of unusual military activity, we recommend British nationals currently in Harare to remain safely at home or in their accommodation until the situation becomes clearer," the Foreign & Commonwealth Office said in a statement.

While most African states gained independence by the end of the 1960s, Zimbabwe remained one of the last European colonies on the continent, ruled by white settlers as Rhodesia until 1980. Mugabe took power after a long guerrilla struggle, and two decades later ordered the forcible seizure of white-owned farms.

The collapse in output that followed was one of the worst economic depressions of modern times. By 2007-2008 inflation topped out at 500 billion percent. Mugabe blamed Britain and the United States for sabotaging the country to bring it to heel. His followers used violence to suppress a growing domestic opposition he branded lackeys of former colonial powers.

The economy briefly stabilised from 2010-2014 when Mugabe was forced to accept a power-sharing government with the opposition, but since then the recovery has unravelled. In the last year, a chronic shortage of dollars has led to long queues outside banks. Imported goods are running out and economists say that by some measures inflation is now at 50 percent a month.

The economic implosion has destabilised the region, sending millions of poor labourers to neighbouring South Africa.

"It's an amazing thing that is happening. It was about time but it might be 20 years too late," said Billy, 30, a Zimbabwean working as a marketing officer in South Africa. Asked if he would return toZimbabwe if the economy was revived, he said: "Definitely, there is no place like home." 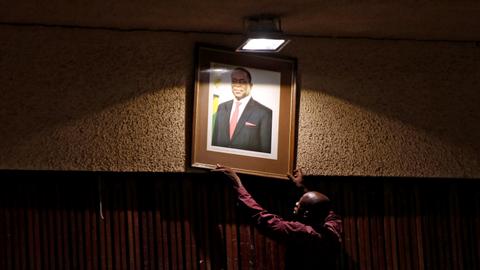 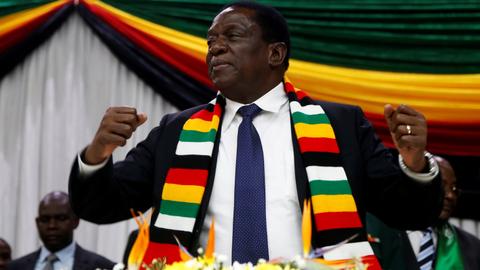