A Hispanic gay man has said he had a two month relationship with Pulse shooter Omar Mateen, who apparently felt used by patrons of the gay nightclub.

The Orlando shooting was not related to terrorism but an act of "revenge," a Hispanic gay man who claims that he had sexual relationship with the perpetrator, Omar Mateen, told Univision Noticias anchor Elena Salinas.

In the interview with Salinas the man – identified only as Miguel – described Mateen as a "very sweet" and "affectionate" man who "was looking for love."

During the interview his face was disguised with a prosthetic mask as he did not want to reveal his identity.

According to Miguel, Mateen used to go the Pulse nightclub as he was attracted to Latino gay men but at the same time resented how they treated him.

"He felt used by them – there were moments in the Pulse nightclub that made him feel really bad. Guys used him. That really affected him," Miguel told Salinas.

"I believe this crazy horrible thing he did – that was revenge."

On June 11, Mateen opened fire at the LGBT nightclub Pulse in Orlando, Florida, killing 49 people and wounding 53 others.

It was "Latin Night" at the nightclub and almost 90 percent of the victims were Latino – half of them having roots in Puerto Rico.

The mass shooting, which was the deadliest in modern American history, has been widely described as a terrorist attack because Mateen swore allegiance to the DAESH terrorist group in a 911 phone call immediately before the incident.

He suggested that his son carried out the killings because he got angry after seeing two gay men kissing in Miami in front of his three-year-old son.

However, it later emerged that some patrons of Pulse had seen Mateen attend the gay nightclub for years before the shooting.

Miguel suggested that Mateen developed resentment towards Puerto Rican gay men after having sexual intercourse with two Puerto Ricans, one of whom later revealed he was HIV positive.

"He was terrified that he was infected. I asked him, 'Did you do a test?' Yes. He went to the pharmacy and did the test … it came out negative but it doesn't come out right away. It takes 4, 5 months," Miguel said.

"When I asked him what he was going to do now, his answer was 'I'm going to make them pay for what they did to me.'"

Miguel stated that he has been interviewed by FBI agents three times since he approached the agency to tell his story about Mateen.

He said he met Mateen through a gay dating site in October 2015. They met 15 to 20 times at a hotel in Orlando, until the end of December that year.

According to Univision, a representative of the hotel confirmed that Mateen stayed at the hotel more than 60 times last year. 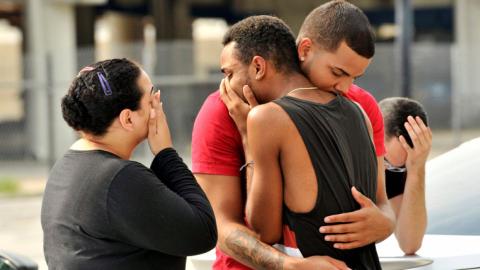