The aircraft landed following a “serious damage” to one of its four engines, airline says. No-one was injured in the incident, but passengers remained on board for hours before they were evacuated.

An Air France A380 superjumbo jetliner taking more than 500 people from Paris to Los Angeles made an emergency landing in Canada on Saturday following “serious damage” to one of its four engines, the airline said.

“Flight 066 landed without further damage at the Goose Bay military airport in Canada and all of the 520 people on board were evacuated with no injuries,” an Air France spokesman in Paris said.

The Airbus double-decker, wide body aircraft was re-routed as it passed over Greenland, landing in Goose Bay in eastern Canada at 1542 GMT, the spokesman said.

The landing went off with no problems for the jetliner carrying 496 passengers and 24 crew members, the spokesman said. The airline was exploring options to get the passengers to the United States.

Video and photo images posted on social media, apparently by passengers or their relatives, showed extensive damage to the front of the outer starboard engine, with part of its external cowling stripped away.

Just got this pic from friend aboard the Air France CDG to LAX flight that suffered engine failure & landed safely in Canada. Terrifying. pic.twitter.com/nXk23Cengc

The cause of the problem was unknown, with one of the plane’s passengers suggesting that a bird might have collided with the engine which was damaged.

Air France operates 10 Airbus A380s, which are the largest passenger planes in the world.

Their version of the craft uses GP7200 engines, a giant turbofan built by General Electric and Pratt and Whitney of the US.

Goose Bay is a base operated by the Royal Canadian Air Force but is also a designated standby airport for diverted transatlantic flights.

Sales of the mammoth A380 have been sluggish and Airbus has said it will reduce production in 2019 to just eight of the superjumbos.

Trump launches attack on liberal tech giants for being biased 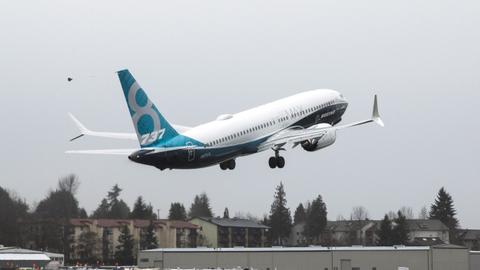