At least twelve people, including six hostages and as many bandits, killed in northeast Brazil as police engaged armed robbers who were staging simultaneous pre-dawn assaults on two banks in the town of Milagres.

At least twelve people, including six hostages, were killed on Friday in a shootout between police and bank robbers attempting to blow up ATMs at two banks in a small town in northeastern Brazil, authorities said.

Six hostages, among them two children, died in the shooting, local media reported, when police opened fire on the robbers at bank branches on the main street in Milagres in the interior of Ceará state.

"Six of the bandits died. We are working to identify the victims," Kelia Jacome, spokeswoman for the governor said by telephone.

She said the attempted night-time robbery was interrupted by a police unit that had been tracking a gang responsible for similar bank robberies in the area, in which explosives were used to blow apart automatic teller machines.

The G1 news website, quoting Milagres Mayor Lielson Landim, reported that five of the dead hostages belonged to the same family. Their car had been hijacked by the armed gang that took them as hostages.

Two suspects were arrested by police, who were searching for other gang members with the help of a helicopter, the governor's office said in a statement.

Brazil is one of the most violent countries in the world, suffering nearly 64,000 murders last year - a homicide rate of 30.8 per 100,000 inhabitants that is three times higher than the level the United Nations considers to be endemic violence.

On January 1, a far-right politician promising a relentless crackdown on crime, Jair Bolsonaro, will become Brazil's new president following his election in October. 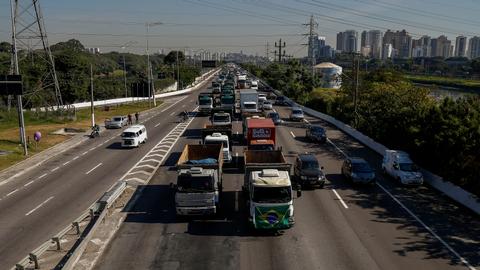