The death toll from the tornadoes rose to at least 94 in Kentucky alone, according to the state's governor, who expects the statewide fatalities from the disaster to surpass 100.

US President Joe Biden has declared a major federal disaster in Kentucky after a swarm of deadly tornadoes hit the state, a move that paves the way for additional federal aid.

Kentucky's governor Andy Beshear formally requested the declaration on Sunday, the head of the US disaster response agency FEMA said. Biden received the request and approved it on Sunday evening.

The governor said the tornadoes were the most destructive in the state's history and that even the sturdiest structures of steel and brick were flattened.

One twister tore across 227 miles of terrain, almost all of that in Kentucky, Beshear said.

Biden had previously declared the storms a federal emergency, enabling the Federal Emergency Management Agency to assist in the aftermath as thousands face housing, food, water and power shortages.

But under an emergency declaration assistance is limited to $5 million, according to the FEMA website.

The death toll on Sunday rose to at least 94 in Kentucky alone, the state's governor said, adding he expects the statewide fatalities from the disaster to surpass 100.

"I can tell you from reports that I've received, I know we've lost more than 80 Kentuckians," Governor Andy Beshear told CNN. "That number is going to exceed more than 100."

Six workers were killed at an Amazon warehouse in Illinois. A nursing home was struck in Missouri. More than 70,000 people were left without power in Tennessee.

But nowhere suffered as much as the small town of Mayfield, Kentucky, where the powerful twisters, which weather forecasters say are unusual in winter, destroyed a candle factory and the fire and police stations.

The genesis of the tornado outbreak was a series of overnight thunderstorms, including a super cell storm that formed in northeast Arkansas.

That storm moved from Arkansas and Missouri and into Tennessee and Kentucky.

READ MORE: Tornado outbreak likely 'one of the largest' in US history 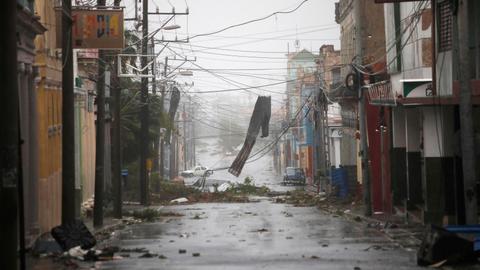