Biden terminates US support for Saudi-led offensive in Yemen

Saudi Arabia's campaign against the Houthis has prompted a widespread humanitarian outcry amid repeated atrocities, including the 2016 targeting of a funeral in Sanaa, the rebel-controlled capital, that killed more than 100 victims.

US President Joe Biden has said that the war in Yemen must end, pledging to terminate US support for Saudi-led offensive operations and to halt arms sales.

"This war has to end," Biden said.

"To underscore our commitment, we are ending all American support for offensive operations in the war in Yemen, including relevant arm sales."

The United States will continue to support and help Saudi Arabia to defend its sovereignty and territory, Biden said in his first foreign policy speech at the Department of State in Washington.

"The kingdom has affirmed its firm position in support of a comprehensive political solution to the Yemeni crisis, and welcomes the US emphasis on the importance of supporting diplomatic efforts to resolve the Yemeni crisis," the official Saudi Press Agency reported.

Saudi Arabia also welcomed Biden's "commitment to cooperate with the kingdom to defend its sovereignty and counter threats against it", it added.

The statement did not address Biden's pledge to terminate US support for Saudi-led offensive operations in Yemen.

Saudi Arabia's campaign against the Houthis has prompted a widespread humanitarian outcry amid repeated atrocities, including the 2016 targeting of a funeral in Sanaa, the rebel-controlled capital, that killed more than 100 victims.

The Iran-backed rebel group overran much of Yemen beginning in 2014, deposing the government and sending it into exile before it returned to the port city of Aden in 2016.

Political turmoil has been the rule rather than the exception since with a third separatist movement known as the Southern Transitional Council being declared in May 2017.

Political infighting has taken place amid what is widely-considered to be the world's worst humanitarian catastrophe with Yemen, the Arab world's poorest nation even before the conflict, facing widespread famine.

The Saudi coalition's actions aimed at rolling back Houthi gains have been widely criticised by rights groups for worsening the situation and the world’s worst man-made humanitarian crisis with nearly 80 percent, or about 30 million, Yemenis needing humanitarian assistance.

About 13 million are in danger of starvation.

No more US 'rolling over' to Russia

Biden said he had warned Vladimir Putin that the US will no longer be "rolling over in the face of Russia's aggressive actions."

"We will not hesitate to raise the cost on Russia and defend our vital interest and our people," Biden said.

"I made it clear to President Putin in a manner very different from my predecessor that the days of the United States rolling over in the face of Russia's aggressive actions, interfering in our elections, cyber attacks, poisoning its citizens, are over," he said.

Biden announced his intention to massively increase the cap on annual refugee admissions to the United States, which fell to a historical low under Trump.

In line with a campaign promise, Biden said he would set at 125,000 the cap on admissions as part of the country's refugee resettlement program, against 15,000 for the current fiscal year.

Biden called on Myanmar's military to "relinquish power" in the Southeast Asian nation and release the government officials and activists detained in this week's coup.

"There can be no doubt: in a democracy, force should never seek to overrule the will of the people or attempt to erase the outcome of a credible election," Biden said.

"The Burmese military should relinquish power they have seized, release the advocates and activists and officials they have detained, lift the restrictions in telecommunications, and refrain from violence." 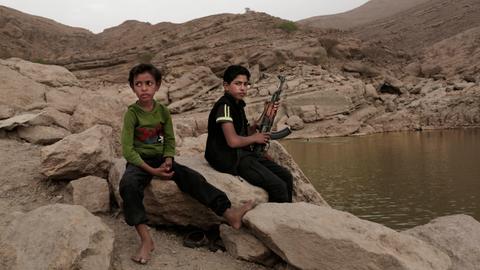