The former vice president's victories were another blow to Vermont Senator Bernie Sanders, whose early strength has evaporated as African Americans and working-class Whites across the country have sided with Joe Biden.

Joe Biden won the Florida and Illinois primaries on Tuesday, building on a remarkable surge as he barrels toward the Democratic presidential nomination at a time when the nation is gripped by concern about the new coronavirus.

But Tuesday’s primaries demonstrated the tremendous uncertainty confronting the Democratic contest as it collides with efforts to slow the spread of the virus that have shut down large swaths of American life.

Polls were shuttered in Ohio even as voting moved forward in Florida, Illinois and Arizona, where some voters and elections officials reported problems.

It marked the third week in a row Biden piled up wins after his victory in South Carolina last month revived his once-flagging campaign.

Since then, most of his party’s establishment lined up behind him as the best option to unseat President Donald Trump in November.

Trump clinched the Republican presidential nomination on Tuesday after a primary victory in Illinois, an expected development considering he had no major competition.

As many people work from home and as schools and businesses close, the primary has remained in limbo, devoid of in-person rallies.

Sanders' pathway to the nomination has dramatically narrowed, but he isn’t expected to leave the race - betting that the national political landscape will look different as the virus continues to reshape life across the country.

Sanders has staged virtual rallies that his campaign says have been watched by millions, and he used the coronavirus outbreak to promote the need for universal, government-funded health care under "Medicare for All," his signature issue.

Biden’s campaign is also taking nothing for granted, even though the former vice president has declared that he'd select a woman as his running mate - suggesting that such preparations for his clinching the nomination may be underway.

Officials in Ohio took the unprecedented step of closing polls Monday, mere hours before they were set to open, pushing back the state’s primary until June.

Turnout was expected to be affected in Illinois, Florida and Arizona, which went ahead with voting even as federal authorities urged people to stay home whenever possible and not to gather in groups of larger than 10.

He sought to head off more states taking similar actions, urging those with upcoming primaries to expand vote-by-mail and absentee balloting, as well as polling station hours, so that efforts to stop the spread of the coronavirus don't further derail his party's nomination contest.

"The right to vote is the foundation of our democracy, and we must do everything we can to protect and expand that right instead of bringing our democratic process to a halt," Perez said in a statement.

Four other states - Louisiana, Georgia, Kentucky and Maryland  have already moved to push back their primaries, and others could follow suit.

That has left the Democratic primary calendar empty until March 29, when Puerto Rico is scheduled to go to the polls - but island leaders are working to reschedule balloting there, too.

'Honest end of the rope'

"We are at the honest end of the rope," Lux said.

The coronavirus has cast a shadow over the Democratic primary race as debates over policy minutiae have taken a back seat to issues of life and death.

“It’s definitely eerie,” said Jesse Lehrich, a Democratic operative and former Hillary Clinton campaign spokesman who is based in Chicago, who added, "Biden and Sanders are debating the merits of marginally different policies in this little pseudo-reality, while America is consumed by an unprecedented crisis."

Millions of voters have already participated in some form of early voting. But there were signs on Tuesday that voters - and poll workers - were staying home. In Burbank, a small community southwest of Chicago, most of the voting stations stood empty at 8 am. Only 17 people had voted, a pace that officials said was unusually slow.

“People are prioritizing their day-to-day survival right now - so they’re not thinking of voting as a priority," said Debra Cleaver, the founder of Vote.org.

Sanders started speaking before the polls closed Tuesday and didn't mention the election results, instead sticking to policy while addressing supporters via livestream. During the coronavirus outbreak, he said, “We must make sure everyone who has a job right now receives the paychecks they need."

"We probably should have been expecting it more than we were," she said.

In Illinois, there was a push to relocate about 50 Chicago-area polling places after locations canceled at the last minute.

Jim Allen, a spokesman for the Chicago Board of Election Commissioners, said Tuesday that the board asked Gov. J.B. Pritzker last week to cancel in-person voting, but the governor refused. Pritzker countered that state law doesn't give him the authority to make the sweeping changes that elections officials wanted.

“Let me tell you this: It is exactly in times like these when the constitutional boundaries of our democracy should be respected above all else. And if people want to criticize me for that, well, go ahead,” the governor said.

Even before Tuesday's results, about half of the delegates in the Democratic primary have already been awarded. Sanders trails Biden by more than 150 delegates nationally - and that lead is growing to near insurmountable.

The coronavirus could amplify calls for Sanders to drop out - especially given more wins for Biden, Lehrich said.

“It all feels like a bizarre formality given the moment - a pointless subplot with a foregone conclusion, in the midst of an existential threat,” he said. 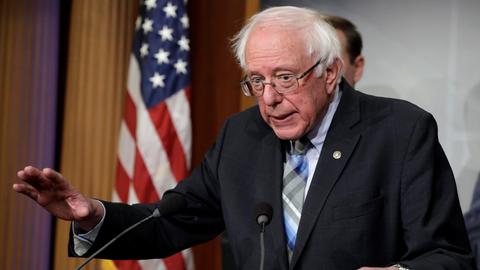