Prosecutors allege Temer was the leader of a "criminal organisation" that diverted more than $470 million funds as part of a scheme related to the construction of a nuclear power plant.

Former Brazilian President Michel Temer was arrested on Thursday on corruption charges, a dramatic development in a sprawling graft probe that has roiled Latin America's largest nation and shows no sign of slowing.

Prosecutors in Rio de Janerio said Judge Marcelo Breitas had issued an arrest order for the ex-president as well as former Cabinet minister and Temer ally Moreira Franco and eight others.

According to the allegation, construction company Engevix paid Temer bribes in exchange for a contract to build a nuclear power plant in the city of Angra dos Reis in the southern part of Rio de Janeiro state.

Prosecutors said in a statement that one Engevix executive said in a plea bargain testimony that he paid more than $300,000 in 2014 to a company owned by a close Temer associate, Col. Joao Baptista Lima Filho. An arrest warrant was also issued for Lima Filho.

"This is a criminal organisation that has been up until now led by Michel Temer," Fabiana Schneider, one of the prosecutors, told reporters.

The case is one of 10 criminal investigations into Temer, a career politician known for his ability to wheel and deal behind the scenes in the capital of Brasilia.

He has denied any wrongdoing.

In his arrest order, Breitas wrote that arresting Temer was necessary to make sure he didn't destroy evidence.

"It is evident the total lack of foundations for the arrest, which serves only to display the former president as a trophy to those that, under the pretext of fighting corruption, mock the basic rules of the constitution," Temer lawyer Eduardo Pizarro Carnelos said in a statement.

Brazil-based independent journalist, Michael Fox has more on the investigation.

Breitas is overseeing the Rio portion of a massive corruption probe involving kickbacks to politicians and public officials.

Since launching in March 2014, the so-called Car Wash investigation has led to the jailing of top businessmen and politicians, including ex-President Luiz Inacio Lula da Silva, who Brazilians universally call Lula.

Former Judge Sergio Moro, who oversaw many Car Wash cases and became an internationally known anti-corruption crusader, stepped down at the end of last year to become justice minister.

Many worried that Moro's absence could hurt the investigations. And the Car Wash probe has suffered a handful of recent defeats, including a decision by the Supreme Court to allow some corruption cases involving campaign finance, which figured heavily in the probe, to be tried by electoral courts.

This week, Moro himself suffered a setback when the speaker of the lower Chamber of Deputies in Congress slammed a tough-on-crime bill the former judge put forward and said it would only be considered after a major reform to the pension system.

Breitas' decision to arrest Temer will go a long way to answering questions about the future of the probe.

"If Lula and Temer can go to jail, who cannot?" said Carlos Melo, political science professor at Insper University in Sao Paulo.

"There are several formerly high-ranking politicians not in office at the moment, which makes them more exposed to police investigations."

Temer, who was vice president, came to the presidency in 2016 after President Dilma Rousseff was impeached and ousted from office for mismanaging the federal budget. 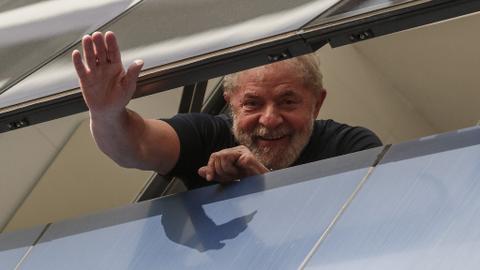