Fearful Venezuelan immigrants lined up in smaller numbers to enter Brazil on Sunday at the only border crossing between the two countries one day after violent protests by Brazilian residents drove hundreds back across the frontier.

Brazil's President Michel Temer called an emergency meeting of key ministers on Sunday after ordering troops to the border with Venezuela as regional tensions build over the exodus from its crisis-hit neighbour.

The move comes after residents in the border town of Pacaraima clashed violently with Venezuelan migrants, driving them out of makeshift camps.

Temer was meeting at his presidential palace in Brasilia with key ministers, including those of defence, public security and foreign affairs, but no further details were being disclosed.

The situation in Pacaraima, on the opposite side of the border to the Venezuelan town of Santa Elena de Uairen, was calm early Sunday, partly because locals managed to force out Venezuelans living on the streets.

"More than 1,200 Venezuelan migrants returned to Venezuela," after Saturday's violence, a spokesman for a Brazilian migration task force told AFP.

"The city looks deserted today, it's very quiet because police reinforcements have arrived and the markets are reopening," said a local in the town of around 12,000 who did not wish to be identified.

The public security ministry announced it was sending a contingent of 60 troops to join teams in the area on Monday.

Tens of thousands of Venezuelans have crossed the border into Brazil over the past three years as they seek to escape the economic, political and social crisis gripping their country.

The latest tensions began early on Saturday, hours after a local merchant was robbed and severely beaten in an incident blamed on Venezuelan suspects, in Pacaraima, where an estimated 1,000 immigrants had been living on the street.

Dozens of locals then attacked the immigrants' two makeshift camps and burned their belongings, forcing the Venezuelans back across the border. Shots were fired, stores were shuttered and debris littered the streets.

"It was terrible, they burned the tents and everything that was inside," said Carol Marcano, a Venezuelan who works in Boa Vista and was on the border returning from Venezuela. "There were shots, they burned rubber tires."

Roraima state Governor Suely Campos made a plea to temporarily close the border and asked Brasilia to send security reinforcements to "face the increase in crime" she links to Venezuelans in the region, particularly in the capital Boa Vista.

Meanwhile, Caracas called on Brazil Saturday to provide "corresponding guarantees to Venezuelan nationals and take measures to safeguard and secure their families and belongings."

Tensions are rising in Latin America over migration triggered by the crises in Venezuela and in Nicaragua, where President Daniel Ortega has led a brutal crackdown on anti-government protesters.

Peru and Ecuador are halting immigrants at the border by requiring them to present passports, which many, lack instead of identity cards.

Peru's passport measures go into effect August 25 – and the government has also narrowed the window for Venezuelans to apply for a temporary work permit, which it has granted for the past two years.

Colombia has said it fears that Ecuador's border controls, which went into effect on Saturday, will leave thousands of Venezuelans stranded in Colombia, from where an estimated 3,000 cross every day.

The United Nations estimates that 2.3 million Venezuelans have fled the crisis looking for work and to escape poverty, and Colombia has given temporary residence to more than 800,000.

Brazilian federal police estimate about 500 Venezuelans enter Brazil every day. In the first semester of this year, around 56,740 requested refuge or temporary residence. 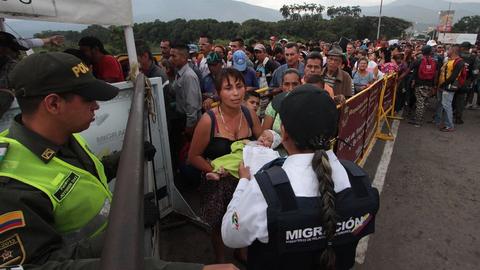