If Michael Bloomberg decides to join the race for the 2020 Democratic nomination, the 77-year-old would have some catching up to do.

A giant in the financial information world, a three-term mayor of New York and a climate change activist: hyper-industrious billionaire Michael Bloomberg has, until now, hesitated to pursue the US presidency.

But if he decides to join the race for the 2020 Democratic nomination, as he has indicated he very well might, the 77-year-old would have some catching up to do.

He would be joining a packed slate of candidates -- 17 at last count -- that includes three others in their 70s, plus a fellow billionaire, Tom Steyer.

Bloomberg would clearly count on leveraging his fortune -- Forbes ranks him as the ninth richest person in the world -- to make up ground on the favorites, including fierce Wall Street critics Bernie Sanders and Elizabeth Warren, both of whom he sees as "extremists."

He would be working for a long-awaited chance to take on fellow New York tycoon Donald Trump, with whom then-mayor Bloomberg often rubbed shoulders at social events, occasionally even offering words of praise, before turning his back when Trump entered politics.

"I'm a New Yorker, and I know a con when I see one," he said dismissively of Trump during the 2016 presidential campaign.

Bloomberg had toyed with the idea of running as an independent, before finally -- fearful of dividing Democratic voters -- throwing his support behind Hillary Clinton.

In March, Bloomberg said he would not run this time around, and could do more good by supporting the eventual nominee than by taking on the "incompetent" Trump.

As a successful businessman who shuns political labels -- economically conservative but liberal on gay rights and abortion -- he has grown increasingly worried by Warren and Sanders passing centrist Joe Biden in some polls, a close advisor said.

But can he win over Democratic voters?

He points to his successes as an executive who helped revitalise post-9/11 New York, his advocacy and financial support for gun control and his work on climate change.

Bloomberg has been a special UN envoy for climate action since 2014, and has helped several US states, counties and cities finance emissions-reducing projects.

The divorced father of two daughters has joined other billionaires in signing the so-called Giving Pledge, which commits them to contribute more than half their wealth to good causes.

In 2018, he spent $100 million to help Democratic candidates regain control of the US House of Representatives.

Still, Bloomberg will have to contend with his image as an elitist swimming against a Democratic orthodoxy that has moved left on taxation and immigration.

And as mayor, Bloomberg, who travels in private jets, was accused of turning New York into a playground of the rich while backing tough police tactics that discriminated against minorities.

No one denies his business acumen, which took him from a middle-class early life north of Boston to his exalted status as one of the world's most powerful media moguls.

Born February 14, 1942 into a Jewish family -- his father was an accountant at a dairy -- Bloomberg excelled in electrical engineering at Johns Hopkins before earning a Harvard MBA.

He went to work at the Salomon Brothers investment bank in 1966 and rose quickly to the rank of partner before leaving with a $10 million bonus in cash and bonds.

Bloomberg is fond of pointing out that his amassed fortune dwarves Trump's, even though the president started in business with millions of dollars from his father.

And Trump clearly chafes at the comparison -- dismissing his physically smaller rival as "little Michael" on Friday and positing that Bloomberg "doesn't have the magic to do well."

Bloomberg does share one concern with Trump: what would he do with his business should he become president? Would he hang on to the purse strings, knowing that doing so could raise conflicts of interest?

When New Yorkers picked him for mayor, Bloomberg did not give up company ownership, but he did step away from day-to-day management.

He is not known for his modesty.

In 2017 he suggested that he felt he had earned a place in heaven for having saved "millions of lives" through his charitable work and anti-tobacco campaigning.

"When I get to heaven, I'm not sure I'm going to stand for an interview," he quipped on CBS's "60 Minutes." 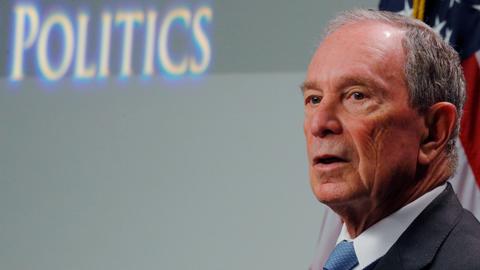