The president asked all his cabinet members to resign, saying that he understands the message of the protests and promising that change is coming.

Chile's President Sebastian Pinera asked all his Cabinet members to offer their resignations Saturday as he prepared to shake up his government in response to a wave of protests, including one that drew more than a million people the day before.

Chile's conservative president also said he might lift the state of emergency that has covered much of the country for the past nine days — a decree that had failed to bring peace after rioting broke out in response to a 4-cent rise in subway fares.

The protests rapidly expanded to cover a far wider sense of frustration among many Chileans who felt they have been struggling to make do as the well-off grew richer.

"The march we all saw yesterday was a massive and peaceful march," Pinera said. "We have all heard the message. We have all changed."

He promised "a new Cabinet to confront these new demands and take charge of the new times."

"All of them (Cabinet ministers) should go because they have been laughing at the people," said Sonia Novoa, a 78-year-old retiree.

Protesters have been calling for better pay, pensions, schools, housing and medical care, among many other demands. While most of the protests have been peaceful, some — especially at the start — have devolved into riots and looting, and the government says at least 20 people have died.

Piñera has responded by raising pensions and the minimum wage, as well as by revoking the subway fare hike. He said he is also considering cutting water fees and highway tolls.

For Pablo Rodriguez, a 30-year-old actor, the steps "are a good start, but aren't sufficient."

Some of those who protested on Friday returned to the downtown Italy Plaza to clean up the garbage and debris left behind.

"But I am going to take advantage of that and say to protest again," said student Andres Villarroel as he headed downtown.

Politicians from both the ruling party and opposition had been asking for the ministerial change to re-establish the government's credibility in the face of the unrest.

Among the most controversial ministers is Andres Chadwick, who has interior minister is in charge of police who have violently broken up protests.

"The president's announcements are great because we are expecting changes and they have to start with something," she said.

In spite of Pinera's announcements and concessions, thousands gathered again Saturday in plazas across Chile. Police with tear gas dispersed protesters in a plaza in central Santiago. As night fell, pot-banging protests could be heard in many cities.

The independent National Human Rights Institute said that since the state of emergency went into effect, 3,162 people have been detained and 997 injured.

A mission from the United Nations High Commissioner for Human Rights, with former Chilean president Michelle Bachelet, is expected next week in Chile to investigate allegations of rights violations.

The president of the Production and Commerce Confederation, Alfonso Swett, participated in a meeting with social and community leaders called by the government to find a way out of the crisis.

"We businesspeople have an obligation to addresses the weariness, pains, deficiencies of citizens, and with great humility, with great conviction, we will be part of this solution," Swett said.

As of Saturday, most of the country was under a state of emergency.

"If circumstances permit, it is my intention to lift the states of emergency" starting at midnight Sunday, said Pinera. 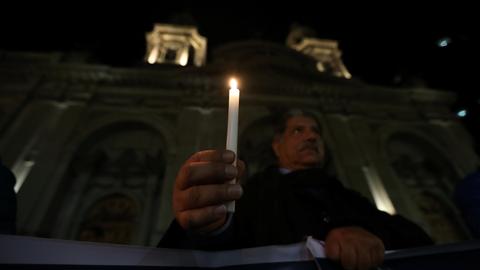