Beijing backs sanctioning gang leaders and deploying a regional police force in the Caribbean country as part of plans to renew a UN political mission there that expires on Friday.

China has asked the UN Security Council to vote on banning small arms to Haiti, sanctioning the Caribbean nation’s gang leaders and even supporting sending a regional police force to the violence-plagued island, diplomatic sources said.

The measures would come as part of plans to renew a UN political mission to Haiti which expires on Friday night.

Haitian demonstrators on Thursday burned tires and blocked streets of the capital to protest ongoing fuel shortages even as the country's main fuel terminal renewed deliveries that had been suspended due to an outbreak of gang violence.

Gang violence has soared since the assassination last year of President Jovenel Moise, creating a political vacuum that criminal groups have taken advantage of to expand control over territory.

At least 89 people have been killed over the past week in clashes between rival gangs in an extremely impoverished and densely populated district of the Haitian capital Port-au-Prince, a local human rights organisation said Wednesday.

In its report, the National Network for the Defense of Human Rights (RNDDH) said 89 people had been murdered, including 21 who were burned to death, and 16 others have been reported missing.

Another 74 people were injured by gunfire or stab wounds and 127 homes were destroyed.

Since June last year, more than 36,000 people have fled Port-au-Prince, which has been paralyzed by clashes between gangs that are blocking roads and seizing control of food delivery trucks.

In a video circulating on social media, Cherizier said the coalition is fighting "against thieves and kidnappers.” 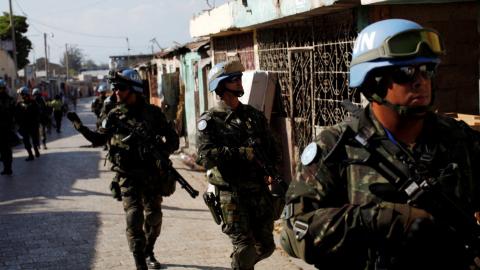