Andrew McCabe, criticised by President Donald Trump for alleged bias against him, steps down as the agency's No 2 official. Sources say McCabe was leaving the bureau effective immediately.

FBI Deputy Director Andrew McCabe is stepping down after having been accused by President Donald Trump of being a Democratic partisan, a government source confirmed Monday.

McCabe is stopping work immediately but will remain on the FBI payroll until March to obtain retirement benefits, the source confirmed.

McCabe, 49, was expected to leave sometime early this year when he became fully eligible for a pension, after two decades in the bureau.

The FBI had no official comment. White House spokeswoman Sarah Sanders said they had no role in McCabe's decision.

"The president wasn't part of this decision-making process," Sanders said.

The departure comes as FBI Director Christopher Wray makes changes to his senior leadership team, replacing two other top aides last week. Such changes are notable amid Trump's public pressure on Wray to get rid of officials who were confidants of James Comey, whom he fired as FBI director last May.

The exit comes amid multiple ongoing investigations, including a justice department watchdog probe into the actions of McCabe and other top FBI officials during the Clinton email probe.

In addition, special counsel Robert Mueller is investigating whether the Trump campaign improperly co-ordinated with Russia during the 2016 presidential election and whether Trump sought to obstruct the inquiry by, among other actions, firing Comey.

McCabe endured months of tough criticism from Republicans for his loyalty to Comey and alleged bias against Trump.

McCabe and Comey had key roles in the FBI's probe of Trump's rival Hillary Clinton in the 2016 election, which ultimately cleared the Democrat of criminal wrongdoing in her misuse of a personal email server while she was secretary of state. The president has repeatedly assailed that decision as wrong.

Both were also involved in the initial stages of an ongoing investigation into whether the Trump campaign colluded with Russians during the election, which Trump calls "fake news."

After Trump fired Comey on May 9, 2017, McCabe became acting director of the FBI.

Days later he appeared before Congress, rebutting Trump's claim that Comey had left the bureau "in turmoil" and lost the confidence of the FBI staff.

Comey "enjoyed broad support within the FBI and still does," McCabe said.

Accusations of bias also arose from McCabe's wife having run as a Democrat for local Virginia political office as a Democrat in 2015, receiving financial support from the party.

In July 2017 Trump questioned on Twitter why Attorney General Jeff Sessions did not dismiss him:

Why didn't A.G. Sessions replace Acting FBI Director Andrew McCabe, a Comey friend who was in charge of Clinton investigation but got....

...big dollars ($700,000) for his wife's political run from Hillary Clinton and her representatives. Drain the Swamp!

After naming Wray the new FBI director in August, Trump kept up the pressure.

He tweeted again in December about McCabe's wife, and his role in the Clinton probe. He added a hint that McCabe was soon to depart, before it was publicly known.

But McCabe retained strong support from within the justice community, and Democrats have called Trump's pressure a part of a broader campaign to tarnish the bureau and weaken the Mueller collusion investigation.

"FBI Deputy Director Andrew McCabe is, and has been, a dedicated public servant who has served this country well. Bogus attacks on the FBI and DOJ to distract attention from a legitimate criminal inquiry does long term, unnecessary damage to these foundations of our government." 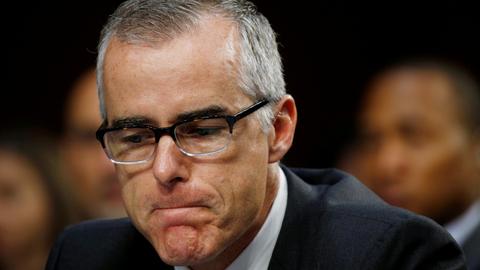