Seven police officers were suspended over the arrest and asphyxiation death of Black man Daniel Prude in Rochester, New York after video of the March incident was released, the city's mayor said, calling it an act of racism.

Daniel Prude, 41, known to his Chicago-based family as “Rell,” died March 30 when his family took him off life support, seven days after officers who encountered him running naked through the street put a hood over his head to stop him from spitting, then held him down for about two minutes until he stopped breathing.

Rochester Mayor Lovely Warren announced the suspension of the officers at a Thursday press conference.

Prude's family demanded legal action against the officers involved, who were suspended on Thursday.

"Racism is alive and well in every system in America."

Warren said she only became aware of the use of force on August 4, and that Police Chief La’Ron Singletary initially portrayed Prude’s death as a drug overdose, which is “entirely different” than what she witnessed in body camera video. The mayor said she told the chief she was “deeply, personally and professionally disappointed” in his failure to accurately inform her what happened to Prude.

Warren said the seven officers would still be paid because of contract rules and that she was taking the action against the advise of counsel.

“I understand that the union may sue the city for this. They shall feel free to do so,” she said.

Warren did not announce any action against Singletary. Police spokeswoman Jackie Shuman did not immediately respond to a requests for comment.

Messages left with the union representing Rochester police officers were not immediately returned on Thursday.

Prude's death happened just as the coronavirus was raging out of control in New York and received no public attention at the time.

On Wednesday, Prude's family held a news conference and released police body camera video obtained through a public records request that captured his fatal interaction with the officers.

Prude had been taken to a Rochester hospital for a mental health evaluation about eight hours before the encounter that led to his death. He was released back into the care of his family and then abruptly ran into the street and took off his clothes.

Prude had been traumatised by the deaths of his mother and a brother in recent years, having lost another brother before that, his aunt Letoria Moore said in an interview. In his final months, he’d been going back and forth between his Chicago home and his brother’s place in Rochester because he wanted to be close to him, she said.

She knew her nephew had some psychological issues, she said. Still, when he called two days before his death, “he was the normal Rell that I knew,” Moore said.

When officers found Prude, they handcuffed him, put a hood over his head because he had been spitting, and then pressed his face into the pavement for two minutes, police video shows.

The hoods are intended to protect officers from a detainee’s saliva and have been scrutinised as a factor in the deaths of several prisoners in recent years.

The videos show Prude, his voice muffled by the hood, begging the white officer pushing his head down to let him go. As the officer, Mark Vaughn, says, “Calm down” and “Stop spitting,” Prude's shouts became anguished whimpers and grunts.

The officer lets Prude go after about two minutes when he stops moving and falls silent. Officers then notice water coming out of Prude's mouth and call over waiting medics, who start CPR.

A medical examiner concluded that Prude’s death was a homicide caused by “complications of asphyxia in the setting of physical restraint.” The report lists excited delirium and acute intoxication by phencyclidine, or PCP, as contributing factors.

"I placed a phone call for my brother to get help, not to get lynched," Joe Prude said outside Rochester's City Hall on Wednesday.

"How many brothers have to die for society to understand this has to stop?"

Protesters demonstrated on Wednesday at the police headquarters building in Rochester and at the spot where Prude died.

Activists are demanding that the officers involved be suspended and prosecuted on murder charges.

Demonstrators will gather in Times Square to demand justice for Prude.

READ MORE: Thousands march in US capital against racial injustice

The 41-year-old's family and activists made his death public on Wednesday, after receiving body cam footage through an open records request.

The news of yet another police killing of an African American triggered fresh outrage, three months after protests ignited nationwide over George Floyd, who was choked to death during an arrest while handcuffed.

Rochester police chief La'Ron Singletary acknowledged anger over Prude's death but emphasised the delay in releasing the video was "not a cover-up."

Officers generally use spit hoods as defence against blood-borne germs from suspects.

But they've been the subject of several lawsuits in recent years, as concerns mushroom over their safety.

Since the police killing in May of Floyd in Minneapolis, demonstrations linked to the Black Lives Matter movement have rocked the nation, with many calling for significant police reforms including defunding or abolition.

The presence of counter-protesters has frequently triggered violent clashes, pushing law and order high up the agenda for November's presidential election.

News of Prude's death comes in the wake of social unrest over the police shooting of Jacob Blake, a black father shot seven times in the back by a white officer in the Wisconsin city of Kenosha.

Los Angeles protests broke out this week after police shot and killed Dijon Kizzee, a black man who was riding a bicycle, apparently in violation of vehicle codes.

Kizzee fled and when deputies caught him, he allegedly punched one of them and dropped a bundle of clothing, which police say contained a handgun.

And in Washington police on Wednesday fatally shot an 18-year-old black man after responding to reports of men with guns in a vehicle.

DC police said during a foot pursuit Deon Kay brandished a firearm before an officer shot him. 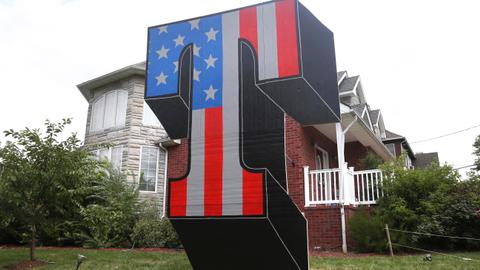