At least 54 children are slated to reunite with their families by a court-ordered deadline says government lawyer Sarah Fabian. The 54 are a tiny fraction of the more than 2,000 children separated from their families under a Trump immigration policy.

Dozens of immigrant children will be released from a detention centre and reunited with their parents on Tuesday.

A government lawyer said Monday at least 54 children under the age of five would join their parents by a court-ordered deadline, only about half the 100 or so children covered by the order.

Parents in US Immigration and Customs Enforcement (ICE) custody "for the most part" were being taken to locations near their children and the families would be released, Justice Department attorney Sarah Fabian said in court.

The administration of US President Donald Trump, whom critics blame for the crisis, was working on final background checks for another five children ahead of Tuesday's deadline.

Locations would not be publicly disclosed, but children have been sent to shelters across the country, Fabian said.

More than 2,000 children were separated from their parents by US immigration authorities at the border this spring before President Donald Trump reversed course on June 20 amid an international outcry.

Last week, US Health and Human Services Secretary Alex Azar said there were "under 3,000" separated children in all.

Late last month, US District Judge Dana Sabraw in San Diego set a 14-day deadline to reunite children under five with their parents and a 30-day deadline for older children.

American Civil Liberties Union attorney Lee Gelernt sought assurances from the government on Monday that advocates would be in position to guide parents when they were released in a foreign land.

The parents would be free while their cases wound through immigration court, which could take years, and may be required to wear ankle monitors.

On Monday, a federal judge in Los Angeles rejected the Trump administration's efforts to detain immigrant families in long-term facilities, calling it a "cynical attempt to undo a longstanding court settlement."

US District Judge Dolly Gee said the government had failed to present new evidence to support revising a court order that limited the detention of children who crossed the border illegally.

Devin O'Malley, a Justice Department spokesman, said the department disagreed with Gee's Monday ruling and continued to review it.

ICE has three family detention centres with room for about 3,000 people in all, and the places are already at or near capacity.

The Trump administration is trying to line up thousands of more beds at military bases.

Some attorneys and advocates prepared for Tuesday's reunions with little information. 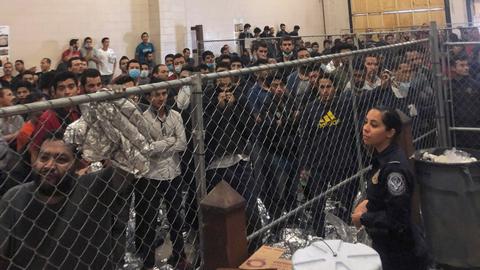