Protesters in Nicaragua are demanding early elections after violent protests in the capital. Since mid April, demonstrators have demanded the resignation of President Daniel Ortega, saying he's becoming a dictator.

A massive march in Nicaragua against President Daniel Ortega's government ended in violence on Wednesday after gunmen opened fire on marchers.

The gunshots sent thousands of demonstrators running for cover in Managua, Nicaragua's capital, and there were unconfirmed reports of about a dozen people wounded.

An Associated Press photographer saw one person with a wound to the head carried off in a stretcher with a sheet covering his upper body, apparently dead.

The gunfire appeared to come from government supporters near the end of the march, but demonstrators armed with improvised bottle-rocket launchers also opened fire in the skirmish.

Human rights observers say more than 80 people have been killed amid a harsh crackdown by government security forces and allied civilian groups on protests that began in April, along with nearly 900 wounded and over 400 arrested.

Wednesday was Mothers' Day in Nicaragua and the mothers of those killed during the protests had organised a protest march along Managua's main streets.

Carlos Pellas Chamorro, the country's most prominent businessman and believed to be the Central American nation's first billionaire, said in an interview with La Prensa newspaper that the Ortega government's political model is "worn out." He called for the election of a new government through "a free and transparent process."

"We must find an orderly solution, within the constitutional framework," Pellas added, "which implies reforms that entail moving up the elections" that right now are due to take place in 2021.

Pellas urged the immediate resignation of the entire electoral council, which has been accused of manipulating things to allow Ortega to consolidate power during his last 11 years in office.

Ortega told a counter-demonstration that he wasn't leaving.

Ortega most recently won re-election in November 2016, when opposition leaders had called for a boycott, alleged that the president had rigged things in his favour and accused him of dynastic ambitions for picking first lady Rosario Murillo as his vice-presidential running mate.

Grupo Lafise Bancocentro, one of the largest conglomerates in Nicaragua, also called for the next presidential vote to be moved up.

"Let it be the will of the people through early elections that establishes justice, democracy and freedom in our country," read the statement signed by the group's president, Roberto Zamora.

Protests that began in April over now-scrapped social security changes have since expanded into a broader movement seeking Ortega's exit.

Amnesty International issued a report this week accusing authorities of a strategy of repression characterised by the excessive use of force, extrajudicial executions, control of the media and the use of para-political groups to quash protests.

Talks sponsored by the Roman Catholic Church on ending the crisis were suspended indefinitely last week due to a lack of progress.

Pellas, whose fortune is estimated to be over $1.1 billion, is president of Grupo Pellas and has interests in sugar, automobiles, liquor, banking, health care and media, among other sectors. 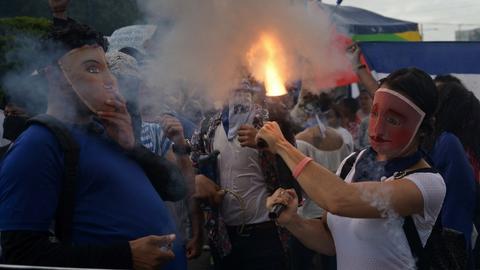