The pardon comes just days after a faction of Fujimori's supporters in the opposition-controlled Congress saved current President Kuczynski from a motion that would have forced him from office in the wake of a graft scandal.

The decision clears Fujimori of convictions for human rights crimes and graft when his right-wing government was in power from 1990 to 2000, and could define Kuczynski's legacy and rewrite political alliances.

"The president of the republic... has decided to grant a humanitarian pardon to Mr Alberto Fujimori and seven other people in similar condition," the presidency said in a statement.

At least two ministers in Kuczynski's cabinet who objected to the pardon told him they wanted to resign, and Kuczynski might reshuffle the cabinet as early as this week, a government source said.

Kuczynski, a former Wall Street banker who vowed as a candidate not to pardon Fujimori, based his decision on a medical review that found Fujimori suffered from "a progressive, degenerative and incurable disease", according to a statement from the president's office.

Late on Sunday, Fujimori was taken to hospital from prison by ambulance to treat a drop in blood pressure and abnormal heart beat.

But many in Peru saw the pardon as part of a quid pro quo. Three days earlier, Fujimori's loyalists - led by his lawmaker son Kenji - unexpectedly saved Kuczynski from a vote in Congress that nearly removed him from office.

In a video Kenji shared on social media, a gray-haired Fujimori, connected to tubes in hospital, was seen smiling after reading Kuczynski's announcement of the pardon on a cellphone with Kenji.

"To save his own skin he cut a deal with Fujimori's supporters to infamously pardon a corrupt killer," said Veronika Mendoza, a leftist leader who competed against Kuczynski in last year's presidential election.

Kuczynski's center-right government has repeatedly denied that a pardon for Fujimori was part of political negotiations.

Fujimori is a deeply divisive figure in Peru. While many consider him a corrupt dictator, others credit him with ending an economic crisis and bloody leftist insurgency when in power.

"He's the best president Peru ever had," said Maria Luisa Cuculiza, a friend and former minister of Fujimori, adding that he no longer had any political ambitions.

"He doesn't want to return to politics. He just wants to be a good grandfather," Cuculiza told Reuters by telephone.

Police fired teargas at scores of Fujimori's opponents in downtown Lima, who waved pictures of the victims of a bloody counterinsurgency campaign during his term.

Officers in riot gear stood guard at Kuczynski's house in the capital's San Isidro financial district as protesters called for the march to make its way there.

Fujimori's family and supporters cheered the pardon as a long-overdue vindication for a misunderstood hero.

Holding a vigil at the hospital where Fujimori remained late on Sunday, his followers waved banners reading "Freedom for Fujimori!"

But the pardon was a blow to the relatives of victims, prosecutors and human rights activists who helped put Fujimori behind bars in a lengthy judicial process that earned Peru global plaudits for fighting impunity.

Kuczynski, "you've betrayed justice, democracy and victims. History will never forgive you," said Indira Huilca, a leftist lawmaker whose union leader father was shot dead in 1992 in what the Inter-American Court of Human Rights deemed an extrajudicial killing.

Kuczynski, who like Fujimori is 79, ran for office to cap a prestigious career in finance and public administration.

The pardon may expose him to allegations of ideological bias as he leads regional criticism of leftist Venezuelan President Nicolas Maduro, whom he has called a "dictator."

The pardon might also prompt one of the biggest political realignments in Peru since Fujimori fled to his parents' homeland of Japan in 2000 as a corruption scandal brought his decade in power to an end.

Fujimori was extradited back to Peru in 2007 and later found guilty of commanding death squads that massacred civilians, bribing lawmakers and having a hand in the kidnapping a journalist, among other crimes.

Despite his downfall, the right-wing populist movement that Fujimori built has remained one of the most potent political forces in Peru.

His eldest daughter, Keiko, leads the opposition party Popular Force that controls Congress, while Kenji has courted ties with Kuczynski's government as he challenges his sister's past decade of leadership of their father's populist following.

On Thursday, Kenji led a surprise defection in Popular Force that deprived Keiko's followers of the votes they needed to remove Kuczynski from office in the wake of a graft scandal.

"We're eternally grateful to you," Kenji told Kuczynski on Twitter, noting that he was speaking for Fujimori's family.

Kenji said Fujimori was recovering in intensive care and would not likely go home for a few days.

As the pardon inflamed long-dormant political tension in Peru, a representative of the political arm of the Maoist-inspired rebel group Shining Path called for Kuczynski to release its historic leader.

"Enough of hate and persecution!" 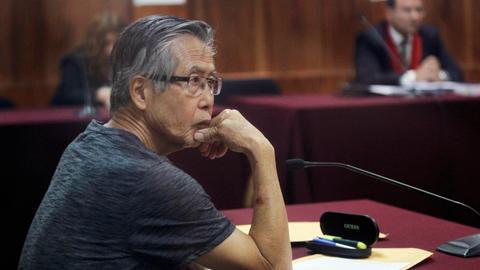 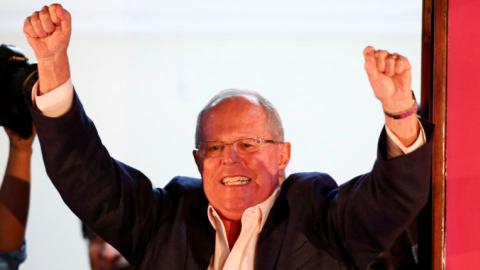 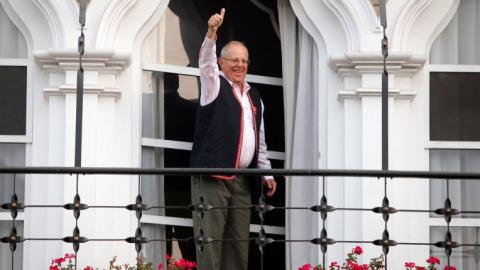