The survey by polling firm Consulta Mitofsky showed Andres Manuel Lopez Obrador, running for the third time, had 32.6 percent of support, up from 31.9 percent in April.

Mexican presidential frontrunner Andres Manuel Lopez Obrador extended his lead to more than 12 points over his nearest rival ahead of the July 1 vote, according to a poll published on Tuesday.

The survey by polling firm Consulta Mitofsky showed Lopez Obrador, running for the third time, had 32.6 percent of support, up from 31.9 percent in April.

Second-placed Ricardo Anaya, the candidate of the "For Mexico in Front" coalition of three parties from the right and left, saw his backing fall slightly to 20.5 percent, versus 20.8 in the previous survey.

The face-to-face poll of 1,000 people, taken between May 11 and 13, had a margin of error of 3.1 percentage points and 26.8 percent of those surveyed expressed no preference.

Most polls have shown Lopez Obrador growing his lead, but some have shown small growth for Anaya.

Former Mexico City Mayor Lopez Obrador recently softened his often harsh tone with business leaders, offering to put out the construction of the capital city's new airport to a concession and even holding a meeting with BlackRock Chief Executive Larry Fink.

A second televised presidential debate will be held on May 20 in the northern border city of Tijuana. 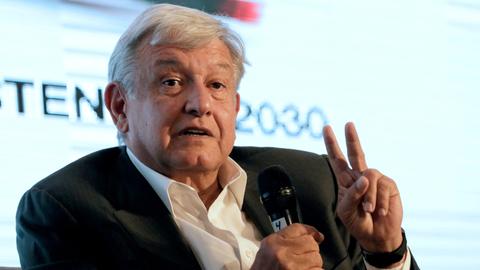 Mexican candidates vow to sweep out corruption in campaign launch