Aiming to quell concerns before what is likely to be a narrow confirmation vote, Secretary of State-designate Mike Pompeo vowed to ramp up efforts against Russia in "each place we confront them."

President Donald Trump's pick to become Washington's top diplomat pledged Thursday to work with US allies to strengthen the Iran deal, vowed to ramp up efforts against Russia in "each place we confront them," and played down fears he is bent on regime change in North Korea.

But he ducked and dodged when asked whether he supports Trump's pounding criticism of the federal investigation into Russian meddling in the 2016 election.

Pompeo suggested he did not share all the president's views, including his scepticism about Russia's interference.

"I take a back seat to no one" when it comes to standing up to Russia, Pompeo said.

He also disavowed his reputation as a "war hawk" and an anti-Muslim hardliner as he sought to woo support from senators to become the next US secretary of state.

He told members of the Senate Foreign Relations Committee that he would restore "swagger" to a State Department left in tatters by Rex Tillerson, and strengthen relations with US partners left ragged after the tumultuous first year of President Donald Trump's administration.

Pompeo, a former congressman, emphasised his close relationship with Trump - something Tillerson never had - and his time at the CIA, which he said had given him a strong appreciation for the necessity to work closely with foreign partners.

He promised to fill scores of unoccupied diplomatic posts, to spend time with the staff and delegate authority, saying current state department staff are "demoralised" and "do not feel relevant."

"All of this - listening, leveraging differences, unleashing talent, teamwork - will become the fabric of a State Department culture that finds its swagger once again," he said.

With a series of tough foreign policy challenges looming, Trump has made the 54-year-old West Point and Harvard Law graduate a key aide for his second year in office, along with fellow arch-conservative John Bolton, who joined the White House this week as the president's national security advisor.

In his CIA post, Pompeo has already taken the lead in arranging a potentially breakthrough summit with North Korea's Kim Jong-un on denuclearization.

The Trump administration also faces crucial decisions on how to react to the use of chemical weapons in Syria, more sanctions on Russia, and a deadline to confirm the 2015 Iran nuclear deal, the Joint Comprehensive Plan of Action.

With a history of provocative statements against Iran, Pompeo's nomination was seen as a sign that Trump's administration intends to rip up the accord.

But on Thursday, he strove to emphasize that he would work to "fix" the deal with sceptical European allies by a May 12 deadline.

Both France's President Emmanuel Macron and Germany's Chancellor Angela Merkel are due to visit Washington on separate official visits before May 12, in part to lobby Trump to preserve a deal they see as the best way to stop Tehran getting a nuclear bomb.

Pompeo confirmed that as CIA director, he had seen no evidence that Iran had broken its side of the bargain, and believes that Tehran would not be able to quickly develop nuclear weapons should the agreement fail.

"I've seen no evidence that they are not in compliance today," he told the committee.

"I want to fix this deal. That's the objective."

"If there is no chance to fix it, I'll recommend to the president we do our level best to work with our allies to achieve a better outcome and better deal. Even after May 12th, even after May 12th, there's still much diplomatic work to be done."

Pompeo - who once hinted he would not be bothered if North Korea's Kim were assassinated - was also asked whether he favours US military action to overthrow the nuclear weapon-armed regime in Pyongyang.

"I'm not advocating for regime change," he stressed.

"I lean more closely to the president's view, which is to continue to pressure the country, to build a diplomatic coalition around the world to put pressure on Kim Jong-un so that we can achieve the United States' goals without ever having to put one of our men or women in harm's way."

He was also quizzed on former statements , when he was a congressman from Kansas, that have led him to be cast as anti-Muslim and anti-gay.

But he cited his record in the CIA as supporting a diverse workforce," focusing on mission and demanding that every team member be treated equally and with dignity and respect."

After five hours of testimony, though, Pompeo's confirmation by the committee, and then the entire Senate, was not assured, even though his nomination in early 2017 as CIA director passed easily.

One Republican senator on the committee, Rand Paul, has declared himself opposed, meaning at least one Democrat will have to cross party lines and support him to see the nomination through to a full vote.

But Senator Lindsey Graham, a Republican hawk on foreign policy, has said Pompeo would be taking over during a "dangerous" period globally, and that "I think he's the right guy at the right time."

A committee vote is expected sometime later this month. 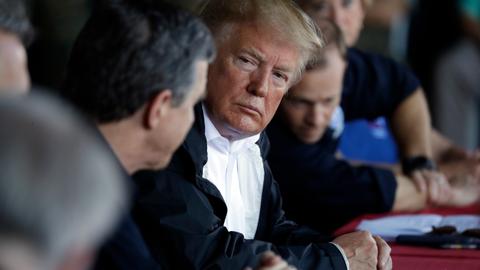