Anti-fascist activist Michael Reinoehl said he acted in self-defence and to protect a friend when he shot a man during skirmishes between Black Lives Matter protesters and a pro-Trump caravan in Portland.

Police have shot and killed an anti-fascist activist as they moved in to arrest him for the alleged fatal shooting of a right-wing activist in Portland, Oregon, last weekend.

Michael Reinoehl, 48, was wanted on a charge of murder when members of a fugitive task force shot him dead in Olympia, Washington after he left an apartment building and got in a car, according to police on Thursday.

"The suspect produced a firearm, threatening the lives of law enforcement officers," a US Marshals Service spokesman said in a statement.

Reinoehl is believed to have fatally shot a supporter of President Donald Trump following skirmishes between Black Lives Matter protesters and a pro-Trump caravan in Portland.

Federal agents from the FBI and the US Marshals Service located Reinoehl on Thursday after a warrant was issued for his arrest.

Reinoehl, a self-declared anti-fascist, was active in Black Lives Matter demonstrations against racism and police brutality in Portland that have gone on for nearly 100 days, according to messages and videos on his Instagram feed.

Reinoehl's encounter with federal agents came shortly after he appeared to acknowledge having killed Danielson, 38, on Saturday telling Vice News the shooting was "totally justified."

In the video interview published by Vice on Thursday, Reinoehl said he had acted in self-defence during the shooting as he thought he and a friend would be stabbed.

"I had no choice. I mean, I, I had a choice. I could have sat there and watched them kill a friend of mine of colour. But I wasn't going to do that".

Portland has seen regular nightly protests since police killed George Floyd, a 46-year-old African-American man, in Minneapolis on May 25.

The administration of Donald Trump in July deployed federal forces to Portland to crack down on the protests.

"Why aren't the Portland Police ARRESTING the cold blooded killer of Aaron "Jay" Danielson," Trump tweeted on Thursday regarding the issue.

Trump signed a memo on Wednesday that threatened to cut federal funding to "lawless" cities, including Portland.

Portland police did not immediately respond to a request for comment. 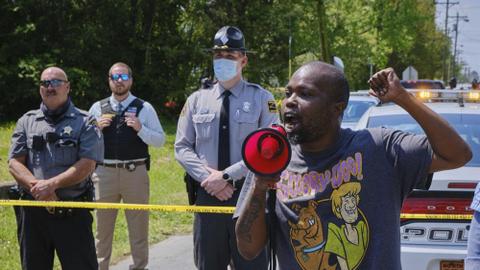