Republican Senator Marco Rubio's "Combatting BDS Act," seeks to counter the global Boycott, Divest and Sanctions movement against Israel over its abuse of Palestinians and occupation of their lands.

Senate Republicans' first bill of the new Congress was intended to insert the legislative branch into President Donald Trump's Middle East policy, but also to drive a wedge between centrist and liberal Democrats over attitudes toward Israel.

For now, the package has stalled on a vote of 56-44, not enough to clear the 60-vote hurdle needed to advance.

Coming amid the partial government shutdown, Democrats said they will block the bill until government is reopened.

The act is part of a wider Middle East policy bill, the first to be introduced by Senate Republicans in the new Congress which began on January.

The bill includes measures supporting Israel and Jordan and slapping sanctions on Syrians involved in war crimes at a time of growing unease in Congress over the Trump administration's shifts in the region.

The anti-BDS legislation has been fiercely criticised by civil rights organisations such as the American Civil Liberties Union as well as by progressives and liberals across the country.

"This Israel anti-boycott legislation would give states a free pass to restrict First Amendment protections for millions of Americans. Despite my strong support for Israel, I oppose this bill because it clearly violates the Constitution."

Democrat Senator Ben Cardin, tweeted that the Senate "should not take up any bills unrelated to reopening the government" until the shutdown is resolved.

The Senate should not take up any bills unrelated to reopening the government until @SenateMajLdr lets us vote on exactly that.

This is not business as usual. This is a crisis and a failure to govern. Dozens of govt agencies are shut down. We must reconcile that first. #Shutdown

Republicans see an opening to focus on newly elected House Democrats, including the country's first Palestinian American woman in Congress, Michigan Representative Rashida Tlaib, who has spoken about the rights of Americans to support the BDS issue.

"This is the US where boycotting is a right & part of our historical fight for freedom & equality," Tlaib said in a weekend tweet.

"Maybe a refresher on our US Constitution is in order, then get back to opening up our government instead of taking our rights away."

They forgot what country they represent. This is the U.S. where boycotting is a right & part of our historical fight for freedom & equality. Maybe a refresher on our U.S. Constitution is in order, then get back to opening up our government instead of taking our rights away. https://t.co/KkmqjR58ZM

TRT World spoke to Ahmed Rehab, Executive Director of the Chicago chapter of the Council on American Islamic Relations, to understand why Republicans chose to introduce this bill now.

Israel sees a growing threat from the BDS movement, which has led to increased boycotts of the Jewish state in support of the Palestinians. A Woodstock-style concert was canceled and some companies including Airbnb stopped offering services in the West Bank settlements. That has led to a "boycott of the boycotts" as Israel pushes back against those aligned with BDS.

In support of Israel, Rubio's bills would affirm the legal authority of state and local governments to restrict contracts and take other actions against those "engaged in BDS conduct." Several states are facing lawsuits after taking action against workers supporting BDS boycotts of Israel.

Independent Senator Bernie Sanders, tweeted, "It's absurd that the first bill during the shutdown is legislation which punishes Americans who exercise their constitutional right to engage in political activity. Democrats must block consideration of any bills that don't reopen the government. Let's get our priorities right."

Democrats must block any legislation that does not reopen the government. It is absolutely absurd that the first Senate legislation during the shutdown is a bill which punishes Americans who exercise their constitutional right to engage in political activity. pic.twitter.com/MT8as5oOrf

But Rubio's office says the bill allows the governments "to counter economic warfare against Israel."

Rubio, a Florida senator, said in a series of tweets, including one pointed at Sanders and Tlaib: "The shutdown is not the reason Senate Democrats don't want to move to Middle East Security Bill.... A significant # of Senate Democrats now support #BDS & Dem leaders want to avoid a floor vote that reveals that."

The shutdown is not the reason Senate Democrats don’t want to move to Middle East Security Bill.

A huge argument broke out at Senate Dem meeting last week over BDS. A significant # of Senate Democrats now support #BDS & Dem leaders want to avoid a floor vote that reveals that.

Both sides were squaring off ahead of Tuesday's votes. A coalition of civil liberties and liberal Jewish groups, including the American Civil Liberties Union and J Street, was working to defeat the legislation, while the influential pro-Israel AIPAC supports it. 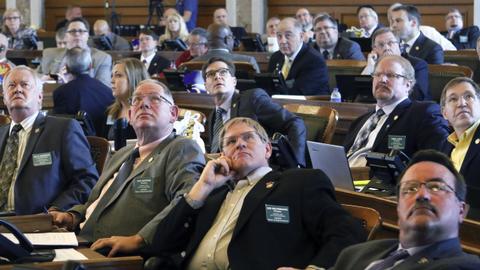