Brazil's former president Luis Inacio Lula da Silva is serving a 12-year sentence on a corruption and money laundering conviction. He and his Worker's Party maintain he is innocent,

Thousands of people chanting "Free Lula!" protested Sunday outside the jail where former President Luis Inacio Lula da Silva is being held on the anniversary of his incarceration, but other Brazilians staged rallies across the country to celebrate the crackdown on corruption that has put him and other politicians behind bars.

Da Silva is serving a 12-year sentence on a corruption and money laundering conviction. Prosecutors say he received a beachfront apartment from a construction company in exchange for a lucrative contract with the state-owned oil company Petrobras.

He and his Worker's Party maintain he is innocent and say he was persecuted by the judiciary and political enemies to prevent him from running for president again.

His imprisonment is at the center of a deeply polarising debate between Brazilians who see him as a political prisoner for championing the poor and others who believe justice is being served for a corrupt politician.

Fernando Haddad, who ran for president in da Silva's place and lost a November runoff election to far-right politician Jair Bolsonaro, spoke at the rally outside the federal police station that is holding da Silva, who is widely known to Brazilians as Lula.

"Lula has been kidnapped by the bourgeoisie," said another speaker, Joao Pedro Stedile, a leader from the far-left Landless Workers Movement. "The ransom is for us to stop fighting. They want to bring the Brazilian people to their knees."

Protester Beth Dori, 65, called da Silva's arrest unjust. "They did this so they could do what they'r e doing now with social security and workers' rights laws," she said, referring to unpopular austerity measures taken on after the Worker's Party was no longer in power.

"Today marks one whole year that Lula hasn't stolen!" a protester yelled from the top of a sound car while the crowd applauded.

"I'm very happy to see he's stayed in prison a whole year, and one year is nothing compared to what he's done to the Brazilian people," said Jose Elias, 67, a retired farm worker.

"Lula and the Worker's Party ruined this country with their corrupt, leftist mess."

Da Silva is the most prominent figure jailed in an anti-corruption investigation called "Operation Car Wash" that has snared dozens of prominent politicians and business figures.

Anti-corruption demonstrators also demanded the continued take-down of "old politicians," calling for the arrest of other corrupt politicians and applauding the judiciary that is going after them.

"I'm here to call for the impeachment of the corrupt Supreme Court . As long as the court is corrupt, Lula and other corrupt politicians have a chance to be free," said Yasmin Albudane, a 24-year-old university student. 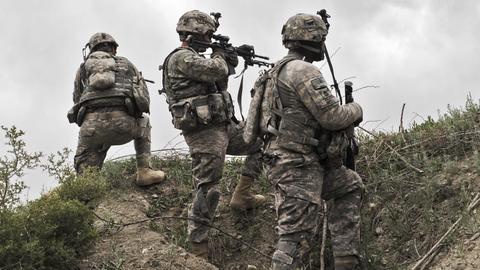 US plans to withdraw all troops from Afghanistan by September 11