US President Trump will announce whether or not he will pull out of the Iran nuclear deal in which Tehran agreed to restrict its nuclear program in exchange for the lifting of some sanctions. Here’s a look at the process leading up to the 2015 pact.

Trump will announce on Tuesday whether the US will pull out of the Joint Comprehensive Plan of Action (JCPOA), commonly known as the “Iran nuclear deal”, which was signed in 2015 between Iran and China, France, Germany, Russia, the UK and US, also called P5+1.

The deal was negotiated under former US president Barack Obama’s tenure starting in 2009 and was touted by the administration as one of the linchpins of Middle East regional security and peace.

However, Trump has repeatedly called the deal a “horrible, horrible embarrassment to [the US]” and the “worst deal in history”, and vowed to scrap the deal as one of his campaign promises.

Months of intensive talks between the US and its European allies now appear deadlocked, with Berlin, London and Paris refusing to rewrite the agreement.

Trump now seems unlikely to renew the US sanctions waivers that Obama announced as the US commitment under the JCPOA, but it is unclear whether Iran will seize on this to renew its nuclear program.

Iran's President Hassan Rouhani said Tehran had been preparing for every possible scenario, including a deal without Washington – which would still include the other signatories that remain committed to it – or no deal at all.

“We are not worried about America’s cruel decisions ... We are prepared for all scenarios, and no change will occur in our lives next week,” he said.

Here’s a look at the process leading up to the nuclear deal and to today’s decision.

January: US President Barack Obama takes office and, in his first week in the White House, tells Iran’s leaders he would extend a hand if they would “unclench their fist” and persuade the West they were not trying to build a nuclear bomb.

September: Britain, France and the United States announce that Iran is building a secret uranium-enrichment site at Fordow, near the holy city of Qom. Iran says it had disclosed the site to the UN nuclear watchdog earlier during the same month.

June: UN Security Council adopts resolution 1929, which creates a basis for crippling US and European Union sanctions in subsequent years.

US and Iranian officials begin secret talks, which intensify in 2013, on the nuclear issue.

US law goes into effect giving Obama the power to sanction foreign banks, including the central banks of US allies, if they fail to significantly reduce their imports of Iranian oil. The result is a drastic reduction in Iranian oil sales and a sharp downturn in the Iranian economy.

Washington and Tehran intensify their nuclear talks, with US officials using US military aircraft, hotel side entrances and service elevators to keep their role under wraps.

June:  Hassan Rouhani is elected Iran’s president on the platform of improving Iran’s relations with the Western countries and the sorry state of its economy, something that can only be achieved by easing sanctions imposed because of Iran’s nuclear program.

November: With the groundwork laid by the secret US-Iran talks, Iran and the six major powers reached an interim pact called the Joint Plan of Action (JPOA), under which Iran agreed to curb its nuclear work in exchange for limited sanctions relief.

The aim is to reach and implement a comprehensive agreement within a year, but the deal and deadline are extended three times.

January: Joint Plan of Action is implemented. The International Atomic Energy Agency (IAEA) releases a report saying that Iran was implementing the deal. The EU eases some sanctions against Iran.

April: Iran and the major powers, Britain, China, France, Germany Russia and the United States reach the framework for a final agreement.

Under the framework, as described by the United States, Iran commits to reducing the number of centrifuges it operates by about two-thirds and to other long-term limitations on its nuclear activities.

July: Iran and the six powers strike an agreement, under which Iran agrees to take a series of steps, including slashing its number of centrifuges and disabling a key part of its Arak nuclear reactor – in return for a significant easing of US, UN and EU sanctions.

The deal is called the Joint Comprehensive Plan of Action (JCPOA).

January 14: Iran releases 10 US sailors, who ended up in Iranian territorial waters on two small boats, less than 24 hours after Iran took them into custody.

January 16: the United States and Iran announced a prisoner swap. Four Americans imprisoned in Iran are freed in return for clemency for at least seven Iranians, most of whom are dual US-Iranian nationals, who were convicted or awaiting trial in the United States. A fifth American is released separately.

March: Iran tests ballistic missiles, a practice the US insisted was “provocative and destabilising.” The UN missile restrictions and an arms embargo on Iran are not technically part of the nuclear agreement.

Then-presidential candidate Donald Trump declares his “number-one priority is to dismantle the disastrous deal with Iran.” Throughout his campaign, he repeatedly calls the JCPOA the “worst deal in history” and vows to renegotiate the pact or scrap it altogether.

January: Iranian President Hassan Rouhani says then president-elect of the US Trump could not unilaterally cancel the nuclear deal Tehran signed with world powers, including Washington and that talk of renegotiating it was “meaningless.”

Donald Trump is inaugurated as the president of the US.

October: Trump announces he would not formally certify that Tehran was complying with the international nuclear pact, and calls on Congress to write legislation to toughen it.

Britain, France, Germany and the European Union warned that Trump’s plan could cause a split with Washington and risks US credibility abroad.

April: French President Emmanuel Macron visits Washington. Trump says he and Macron could have an agreement soon on the Iran nuclear deal.

The two leaders speak on the same day Israeli Prime Minister Benjamin Netanyahu presses to jettison the Iran deal, while Trump tells a press conference he would decide on or before May 12, on whether to withdraw from the accord.

But they remain determined that the Iran deal implementation mechanism – the JCPOA – must remain in place, even if a supplemental agreement is found.

May: Trump announces via Twitter that he will make his announcement regarding the nuclear deal on May 8.

I will be announcing my decision on the Iran Deal tomorrow from the White House at 2:00pm.

Iranian President Hassan Rouhani said, "it is possible that we could face some problems in the coming two to three months, but we will overcome this."

He has also said his country would stay in the agreement even if the US pulls out. 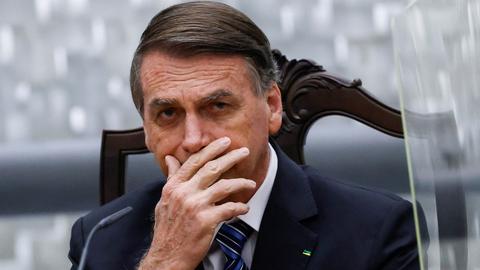