Top US generals tell Senate committee they personally advised keeping 2,500 American troops in Afghanistan to bolster Ghani's embattled government, contradicting President Biden, who maintains no military chief advised him in favour of it.

Top American generals have said they recommended keeping several thousand US troops in Afghanistan, contradicting President Joe Biden who said last month that no one suggested he leave military personnel in the country.

"I recommended that we maintain 2,500 troops in Afghanistan. And I also recommended earlier in the fall of 2020 that we will maintain 4,500 of that time, those are my personal views," said CENTCOM Commander General Frank McKenzie on Tuesday.

"I also had a view that the withdrawal of those forces would lead inevitably to the collapse of the Afghan military forces, and eventually the Afghan government," McKenzie told a Senate hearing on the Afghanistan withdrawal.

He was flanked by Defense Secretary Lloyd Austin and Chairman of the Joint Chiefs of Staff General Mark Milley.

In August, Biden said in an interview with ABC News' George Stephanopoulos that no military leader advised him to leave a small troop presence in Afghanistan.

"So no one told –– your military advisors did not tell you, 'No, we should just keep 2,500 troops. It's been a stable situation for the last several years. We can do that. We can continue to do that"? Stephanopoulos asked Biden on August 18.

"No. No one said that to me that I can recall," Biden replied at the time.

Milley also said he recommended that 2,500-3,500 troops stay in Afghanistan.

"My assessment was back in the fall of 20 and it remained consistent throughout, we should keep a steady state at 2,500 and it could bounce up to 3,500 Maybe something like that, in order to move toward a negotiated gated solution," said Milley.

Congress is set to hold a hearing where experts will review Washington's operations in Afghanistan. Will they also see troop withdrawal a "strategic failure" as top US General Milley did? We ask Jeff Le of Truman National Security Project

President Biden, in April, ordered a complete pullout of forces from Afghanistan by September 11, following through on an agreement reached with the Taliban by former president Donald Trump to end the US troop presence there.

The Taliban seized control of Afghanistan after taking Kabul on August 15 two weeks ahead of US withdrawal, forcing then-president Ashraf Ghani and other top officials to flee the country.

The unexpected power grab triggered a rush to flee Afghanistan, including civilians who assisted foreign soldiers or groups and now fear the Taliban's retribution.

Senator James Inhofe, the panel's top Republican, described it as a "horror of the president's own making."

Republican Senator Joni Ernst said Biden's decision squandered US sacrifices for what he thought would be "a cheap political victory."

"The loss of our service members, and abandonment of Americans and Afghan allies last month was an unforced, disgraceful humiliation that didn't have to happen," Ernst said.

White House spokesperson Jen Psaki said Biden's military experts had provided "a range of viewpoints" about Afghanistan, and that Biden believed leaving troops there would "mean war with the Taliban."

Psaki said Biden had been given "split" opinions by his military advisers.

Psaki said the president asked for candor from his advisers, "he's not looking for a bunch of yes men and women."

"If there's conflicting advice given, by necessity, some people some people's advice will not be taken," she said.

Milley was asked whether the pullout and chaotic evacuation from Kabul had damaged US credibility.

"I think that our credibility with allies and partners around the world and with adversaries is being intensely reviewed by them to see which way this is going to go and I think 'damage' is one word that could be used, yes," he said.

Milley acknowledged that while the evacuation effort was a logistical accomplishment, the withdrawal was a "strategic defeat" that left the Taliban back in power.

"Outcomes in a war like this, an outcome that is a strategic failure — the enemy is in charge in Kabul, there’s no way else to describe that — that is a cumulative effect of 20 years," he said, adding that lessons need to be learned, including whether the US military made the Afghans overly dependent on American technology in a mistaken effort to make the Afghan army look like the American army.

Austin said the United States "did not fully comprehend the depth of corruption and poor leadership" in the Afghan armed forces.

"We helped build a state, but we could not forge a nation," he said.

"The fact that the Afghan army we and our partners trained simply melted away –– in many cases without firing a shot –– took us all by surprise," the Pentagon chief said.

"It would be dishonest to claim otherwise."

Austin said the United States had provided the Afghan military "with equipment and aircraft and the skills to use them" but "in the end, we couldn't provide them with the will to win." 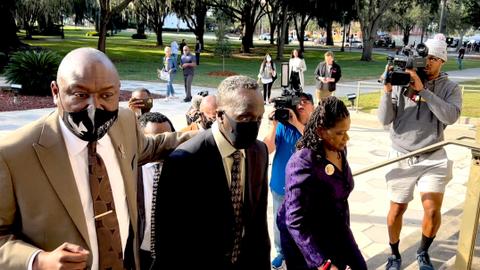