US President Trump has dismissed concerns over his fitness to serve after getting treatment for Covid-19 as he prepares to return in-person campaign events as early as Saturday.

Republican President Donald Trump has prepared to return to the campaign trail with a pair of weekend rallies after his Covid-19 diagnosis sidelined him for a week in the race for the White House against Democratic nominee Joe Biden.

Trump, who announced he had been infected with the coronavirus on October 2 and spent three nights in a military hospital receiving treatment, said late on Thursday he was feeling "really good" and, with a doctor's blessing, aimed to campaign in Florida on Saturday and in Pennsylvania on Sunday.

Trump's illness has kept him from crisscrossing the country to rally support and raise cash in the final weeks before the November 3 election. A return to in-person events would be aimed at convincing voters he is healthy enough to campaign and to govern.

While Trump has released several videos on Twitter, he has not appeared in public since he returned home from the hospital on Monday. Biden has continued to campaign, with events scheduled on Friday in Las Vegas, Nevada.

US Centers for Disease Control and Prevention guidelines say people who are severely ill with Covid-19 might need to stay home for up to 20 days after symptoms first appear.

Biden, who has sharply criticized Trump's handling of the pandemic, is beating the Republican in national polls, though that lead is narrower in some of the swing states that may determine the election's outcome.

Sounding hoarse and occasionally pausing and clearing his throat, Trump told Fox News host Sean Hannity in an interview late on Thursday that he was likely to be tested for the virus on Friday. The White House has declined to say when Trump last tested negative.

The president is expected to host a "virtual rally" on Friday by appearing on conservative radio host Rush Limbaugh's radio program.

Trump's White House and campaign have experienced an outbreak of the virus in the last week, with multiple top aides, including the president's press secretary and campaign manager, testing positive.

Trump and his staff have largely eschewed wearing masks, against the guidance of health professionals, and held rallies with thousands of people in indoor and outdoor venues despite recommendations against having events with large crowds.

.@SpeakerPelosi: "Tomorrow, by the way, tomorrow, come here tomorrow. We're going to be talking about the 25th Amendment."

House Speaker Nancy Pelosi has been questioning President Donald Trump's fitness to serve, announcing legislation that would create a commission to allow Congress to intervene under the 25th Amendment to the Constitution and remove the president from executive duties.

Just weeks before the election, Pelosi said Trump needs to disclose more about his health after his Covid-19 diagnosis. She noted Trump's “strange tweet” halting talks on a new coronavirus aid package, he subsequently tried to reverse course, and said Americans need to know when exactly he first contracted Covid as others in the White House became infected.

On Friday, she plans to roll out the legislation that would launch the commission for review.

“The public needs to know the health condition of the president,” Pelosi said, later invoking the 25th Amendment, which allows a president's cabinet or Congress to intervene when a president is unable to conduct the duties of the office.

.@SpeakerPelosi will stop at NOTHING to take down @realDonaldTrump.

First it was the Russia hoax, then sham impeachment. Now she’s trying to invoke the 25th amendment because he... fully recovered from the coronavirus?

We won’t let her get away with it.https://t.co/L9fRPFpynC

Crazy Nancy is the one who should be under observation. They don’t call her Crazy for nothing! https://t.co/7vE0Jvq0dM

“Crazy Nancy is the one who should be under observation. They don’t call her crazy for nothing!” the president said.

The president's opponents have discussed invoking the 25th Amendment for some time, but are raising it now, so close to Election Day, as the campaigns are fast turning into a referendum on Trump’s handling of the coronavirus pandemic.

The amendment says the vice president and a majority of principal officers of the executive departments “or of such other body as Congress” may by law provide a declaration to Congress that the president “is unable to discharge the powers and duties of his office”. At that point, the vice president would immediately assume the powers of acting president. 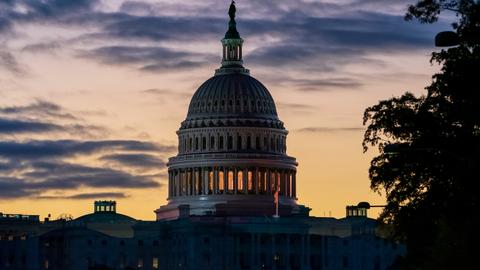