A Democratic-controlled US House of Representatives committee approved charges of abuse of power and obstruction against Republican President Donald Trump on Friday, making it almost certain he will become the third American president in history to be impeached.

A deeply divided House Judiciary Committee voted 23-17 along party lines to approve an article of impeachment charging Trump with abusing the power of his office to pressure Ukraine to investigate a possible rival in the 2020 presidential election, Democrat Joe Biden.

The panel also backed a second article by the same margin accusing Trump of obstructing Congress' investigation of the Ukraine scandal by ordering administration officials not to cooperate with the impeachment inquiry.

The full House, where the Democrats hold a majority, is likely to approve the charges next week, completing the impeachment process and sending Trump for trial in the Senate within weeks. But the Republican-led chamber is unlikely to vote to find the president guilty and remove him from office.

In raucous hearings, Republicans have defended Trump and accused Democrats of a politically motivated farce.

Democrats have accused the president of endangering the US Constitution, jeopardising national security and undermining the integrity of the 2020 election by pressuring Ukrainian President Volodymyr Zelenskiy in a July phone call to investigate Biden.

The abuse of power charge also accuses Trump of freezing nearly $400 million in US security aid to Ukraine and offering a possible White House meeting to Zelenskiy to get him to publicly announce the investigations of Biden and his son Hunter, who was on the board of a Ukrainian gas company.

Trump also asked Ukraine to investigate a debunked theory that Ukraine, not Russia, interfered in the 2016 US election.

Trump and Republicans say the president did nothing improper in his call with Zelenskiy, and that there is no direct evidence he withheld aid or a White House meeting in exchange for a favor.

A senior Democratic aide said the House tentatively plans to hold an impeachment debate next Wednesday.

Signaling investors' lack of concern at political upheaval, US stocks hit fresh record levels on Friday on optimism over a possible trade deal between China and the United States.

Republican President Richard Nixon resigned in 1974 before he was impeached over his involvement in the Watergate scandal.

Trump is running for re-election in 2020, a contest expected to be a bitter, partisan battle with a Democratic nominee who will be chosen next year. Biden, a former vice president, is among the leading Democratic contenders.

The impeachment inquiry was launched in September after a whistleblower complaint about the July 25 call between Trump and Ukraine's Zelenskiy. 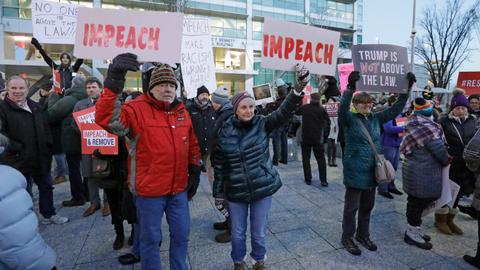