The White House announced that the sanctions freeze any assets of Iran's foreign minister, Mohammad Javad Zarif in the United States or controlled by US entities.

The US government is imposing financial sanctions on Iran's foreign minister, Mohammad Javad Zarif, as part of its escalating campaign of pressure against Iran.

The White House announced that the sanctions freeze any assets of Zarif in the United States or controlled by US entities.

Iranian officials have noted that Zarif doesn't have any US assets.

US officials say Zarif's travels to New York for official UN business would be uninhibited by the new sanctions, in accordance with America's international obligations.

Zarif said in a tweet later on Wednesday that the US sanctioned him because he is a threat to its agenda.

The US' reason for designating me is that I am Iran's "primary spokesperson around the world"
Is the truth really that painful?
It has no effect on me or my family, as I have no property or interests outside of Iran.
Thank you for considering me such a huge threat to your agenda.

Zarif met earlier this month with Republican Sen. Rand Paul, a Trump ally, about potentially opening a back channel for restarting nuclear talks between the two countries.

US National Security Adviser John Bolton said on Wednesday that the Trump administration considers Zarif to be an illegitimate spokesman for Iran.

“I think it’s a very significant decision that the president made, we announced about a month ago we were going to do it, now we’re carrying through on it,” Bolton said in an interview on Fox Business Network.

“And it sends a signal that we consider Javad Zarif the foreign minister an illegitimate spokesman for Iran,” he added.

Bolton also said the US will renew sanctions waivers for Iranian nuclear programs that allow Russia, China and European countries to continue their civilian nuclear cooperation with Tehran.

"I think the idea here is we are watching those nuclear activities very, very closely," he said, adding  "so this is a short 90-day extension."

US Secretary of State Mike Pompeo in early May extended five of seven sanctions waivers for 90 days, a shorter period than earlier waivers. The waivers allow work at Iran's Bushehr nuclear plant, the Fordow enrichment facility, the Arak nuclear complex and the Tehran Research Reactor.

Trump last year abandoned the nuclear agreement, arguing that he wanted a bigger deal that not only limited Iran's atomic work, but also reined in its support for proxies in Syria, Iraq, Yemen and Lebanon, and curbed its ballistic missile program.

Trump also tightened sanctions on Iran in May to try to choke off its oil exports.

Fears of a direct US-Iranian conflict have risen since May with several attacks on oil tankers in the Gulf, Iran's downing of a US surveillance drone, and a plan for US air strikes on Iran last month that Trump called off at the last minute.

Wendy Sherman, who served as undersecretary of state under former President Barack Obama and was the lead US negotiator for the Iran nuclear agreement, linked the action against Zarif to the sanctions waivers.

"For a president who says he is ready to talk with Iran without preconditions, sanctioning the foreign minister of Iran clearly undermines that objective and risks dangerous escalation instead," said Sherman, who is director of the Center for Public Leadership at the Harvard Kennedy School.

"One assumes sanctioning Zarif is the price for those waivers. The internal administration battle of war or diplomacy apparently wages on," she said.

The Washington Post reported on Tuesday that Trump, in an Oval Office meeting last week, sided with Treasury Secretary Steven Mnuchin who argued for renewing the waivers over the objections of Pompeo and Bolton.

The report said Mnuchin argued that if the waivers were not renewed, "the United States would have to sanction Russian, Chinese and European firms that are involved in projects inside Iran that were established as part of the 2015 nuclear deal."

The Treasury Department asked for more time to consider the effects of such sanctions, the Post reported. 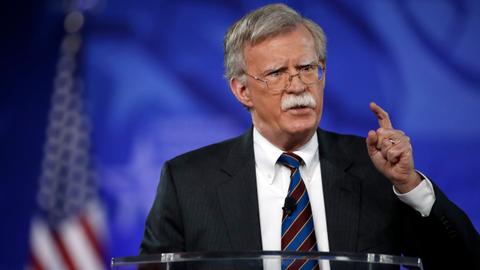