Who is Bolsonaro, the man nicknamed the Trump of the Tropics?

Far-right politician Jair Bolsonaro has been sworn in as Brazil’s president after winning on an anti-graft platform. But Bolsonaro’s history of alarming opinions ranges from celebrating torture and making rape threats to mining the Amazon.

Right-wing nationalist Jair Bolsonaro was sworn in as Brazil's president on Tuesday.

One of his first actions was to call on Congress to combat endemic corruption. He said his government would be guided by the promises he made to Brazilian voters fed up with graft, high levels of violent crime and a still-sputtering economy.

Brazil has been in the grip of corruption scandals over the past few years and the country has been swinging right as it looks for answers to unemployment, increasing crime rates and politicians who have failed them. So who is the new president and what is he promising his voters?

Bolsonaro campaigned on his hard line stance on crime, an unvarnished oratory style, and a career that has been largely free of corruption accusations.

He is also known —  and has drawn fire —  for saying things which are widely considered sexist, misogynistic, racist and homophobic. Saying his daughter’s birth was “a moment of weakness” or that he would not rape one congresswoman because she was too “ugly” are just the tip of what the president is known for saying and getting away with.

Tens of thousands of people took to the streets of Brazil's major cities on September 29 in women-led protests against Bolsonaro. Angered by his history of making offensive comments, which include belittling rape and calling the gender pay gap justified, female protesters used the hashtag #EleNao, or #NotHim, to drum up support for a series of international protests against the former army captain.

“The Trump of the Tropics” as the media labelled him, inspires fear in those he slams, shames or threatens with his unbridled comments.

Yet his strongman rhetoric on law and order and easing gun control soared above the rest of his statements with many voters, especially in Brazil's booming farm country.

Jair Bolsonaro was born in the town of Glicerio, in Sao Paulo, on March 21, 1955. He comes from a family of Italian and German descent.

A Catholic who is known for his sway with Evangelical Protestants, Bolsonaro has married three times and has four sons and one daughter.

He went to Brazil’s main military academy and graduated in 1977 as an artillery officer. Later he served as paratrooper and was described as “ambitious and aggressive” by his colleagues.

He served in the army for 17 years before leaving as a captain.

In 1988, he was elected as a city councilor in Rio de Janeiro. Two years later, he also elected as a federal deputy to the Chamber of Deputies. He served seven consecutive terms from 1991 to 2018 as a congressman.

Bolsonaro switched to the Social Liberal Party (PSL) in June 2018, before he was elected president.

A former army man who was vocal about his admiration for Brazil's 1964-1985 military dictatorship, Bolsonaro won the presidential election in the run-off with 56 percent of the vote on October 28.

Bolsonaro has pledged to crush crime, which has been welcomed in a country where the murder rate has passed 62,000 per year and nearly as many rapes have been reported.

He also voiced his intention to use the armed forces for routine street patrols, describing the country as “at war”.

“If Congress grants permission, I would put armed forces in the streets,” Bolsonaro said.

Bolsonaro vows to follow US President Donald Trump's example in several ways, and not just through his freewheeling statements. He promised to move Brazil’s embassy in Israel from Tel Aviv to Jerusalem, just like Trump.

He also wants to pull Brazil out of the Paris Agreement on climate change.

This move in particular has environmentalists worried, as do his plans to build hydroelectric dams in the Amazon and open up indigenous reservations to mining. The Amazon’s indigenous are seen as the last custodians of the world's biggest forest.

Congratulations to President @JairBolsonaro who just made a great inauguration speech - the U.S.A. is with you!

Calling military for a coup

Jair Bolsonaro said on September 28 that he will not accept the result of the election if he lost.

"I cannot speak for the Armed Forces commanders, but from the support I see in the streets, I will not accept an election result that is not my own victory," Bolsonaro said in an interview with Band TV at a hospital. Bolsonaro was recovering from emergency surgery after he was stabbed on September 6, by an assailant as he was carried aloft by supporters in a street rally. He recovered and restarted his campaign again.

Bolsonaro previously accused the Workers Party of plotting to rig the elections, which some Brazilians have interpreted as a warning intended to encourage a military coup if he did not win. 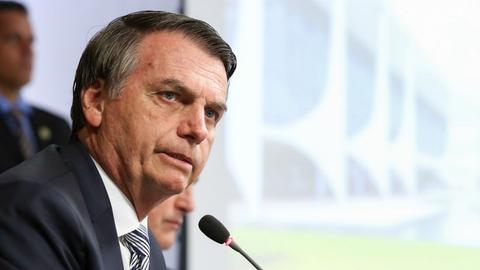 Bolsonaro open to discussing future US military base in Brazil