1
Harris makes debut as Biden's VP, says US 'is crying out for leadership'
2
Apple on brink of becoming first US company worth $2 trillion
3
Gulsin Onay plays Beethoven with a deep love in her heart
4
How Kamala Harris built her political identity
5
Tel Aviv window washer becomes TikTok star with her towering dance moves

Rivera, 33, is believed to have accidentally drowned after renting the boat with her young son at the camping and recreational hotspot around an hour's drive northwest of Los Angeles.

"Glee" star Naya Rivera's four-year-old son has told investigators that his mother, whose body was found in a Southern California lake, boosted him back on to the deck of their rented boat before he looked back and saw her disappearing under the water.

"She must have mustered enough energy to get her son back on the boat, but not enough to save herself," Ventura County Sheriff Bill Ayub said at a news conference on Monday.

The boy, Josey Hollis Dorsey, was found asleep and alone in a life vest on the drifting pontoon boat about three hours after they launched on Lake Piru northwest of Los Angeles, setting off a five-day search that ended with the discovery of the body of the 33-year-old floating near the surface early on Monday, authorities said.

The mother and son had gone swimming, which was permitted in that part of the lake, Ayub said. She was not wearing a life vest.

Authorities believe that Rivera drowned accidentally and that her body was most likely trapped in the vegetation under the lake for several days before floating to the top, Ayub said.

Divers had already thoroughly searched the area where she was eventually found, but shrubbery that had grown wildly in the area, which was recently dry, must have kept her hidden in the murky water.

"Rest sweet, Naya. What a force you were," wrote "Glee" co-star Jane Lynch on Twitter.

Steven Canals, who co-created and produced the FX television show "Pose," tweeted that he was "heartbroken over all the stories that will remain untold."

Rivera was best known for her role as high school cheerleader Santana Lopez in "Glee."

She starred for six seasons in the wildly popular musical television series set in a US high school that ended in 2015.

"Naya Rivera was a fierce talent with so much more to do and this is such a terrible tragedy. We are forever grateful for the indelible contribution she made to 'Glee,' from the first episode to the last," said a statement from 20th Century Fox TV and Fox Entertainment.

The news conference has concluded. Sheriff Ayub has confirmed the body recovered at Lake Piru today was Naya Rivera. Our hearts go out to her family, friends and fans during this difficult time. An autopsy will be performed to determine the cause of her death.

A native of Santa Clarita, California, Rivera began acting at 4, appearing in such series as “The Fresh Prince of Bel-Air,” “Family Matters” and “The Bernie Mac Show.”

She worked odd jobs as a telemarketer, a nanny, a waitress, and an Abercrombie & Fitch greeter before landing the role of Santana Lopez on Ryan Murphy’s “Glee.”

She auditioned by singing Destiny’s Child’s "Emotion." The plot offered her no speaking lines.

Rivera struggled to get career traction amid the rising young talent on the show that included Cory Monteith, Lea Michele, Chris Colfer, Darren Criss, Amber Riley, Melissa Benoist, and Dianna Agron. She was no longer a series regular during the sixth and final season of “Glee.”

“It would be an understatement to say that ‘Glee’ changed my life. It overhauled it. It got me out of debt. It helped to cement my career. And before the show, I’d never had a group of people I was that close with,” she wrote in her memoir, titled “Sorry Not Sorry: Dreams, Mistakes, and Growing Up.”

Rest sweet, Naya. What a force you were. Love and peace to your family.

Rivera’s death is the latest death in a tragic arc of “Glee” actors.

Monteith died in 2013, exactly seven years to the day after Rivera's body was identified, from an overdose of alcohol and drug, and Rivera’s ex-boyfriend Mark Salling, who played a jock on the series, killed himself in 2018 after pleading guilty to child pornography charges.

Rivera and Salling dated for three years and broke up in 2010.

The boy, Rivera's son from her marriage to actor Ryan Dorsey, was safe and healthy and quickly reunited with family members after he was found, authorities said.

His parents divorced in 2018 after nearly four years of marriage.

In the preface to her autobiography, Rivera wrote that motherhood had changed her life and given it perspective. She said she was braver, too.

"Your life doesn’t have to be perfect for you to be proud of. In fact, I think it’s the opposite: the more imperfect your life has been, the prouder you should be, because it means you’ve come that much further, and also probably had a lot more fun along the way." 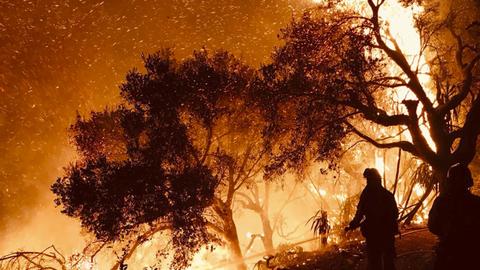 1
Harris makes debut as Biden's VP, says US 'is crying out for leadership'
2
Apple on brink of becoming first US company worth $2 trillion
3
Gulsin Onay plays Beethoven with a deep love in her heart
4
How Kamala Harris built her political identity
5
Tel Aviv window washer becomes TikTok star with her towering dance moves