The Mona Lisa has been behind safety glass since the early 1950s, when it was damaged by a visitor who poured acid on it. Since then there have been several other unsuccessful attempts at vandalising the painting.

Visitors to the Louvre in Paris should have a clearer view of Leonardo da Vinci's "Mona Lisa" after the museum installed a new, more transparent form of bullet-proof glass to protect the world's most famous painting.

The Mona Lisa has been behind safety glass since the early 1950s, when it was damaged by a visitor who poured acid on it. Since then there have been several other unsuccessful attempts at vandalising the painting.

"Today, the Mona Lisa is behind extremely transparent glass, which really gives the impression of being very close to the painting," Delieuvin said.

On October 24, the Louvre will open an exhibition celebrating the works of Leonardo da Vinci to mark the 500th anniversary of his death.

The exhibition will feature nearly 120 pieces, including paintings, drawings, sculptures and manuscripts from European and American institutions, but not the "Mona Lisa" which will remain in its dedicated room in the Louvre's Denon wing.

The Louvre opened a new sprawling art conservation centre Tuesday some 200 kilometres from Paris to protect the museum's priceless artworks from its flood-prone storage reserves.

Protecting the museum's works — many of which are out of public view in the belly of the former palace — has taken on added urgency in recent years after severe floods in 2016 and 2018 forced the Louvre to evacuate endangered artworks from basements and to close exhibits.

Officials boast that the newly-constructed Lievin site, which lies a short distance from the museum's other outpost the Louvre-Lens, will store some 250,000 works within a five year period. 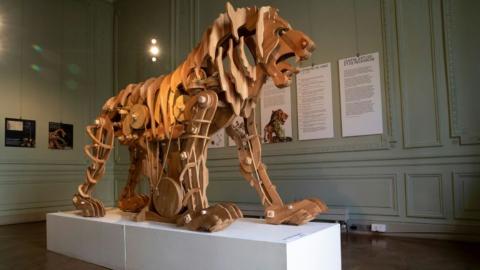