Netflix has delivered stronger-than-expected subscriber growth in the past quarter, keeping ahead of new streaming rivals competing for viewers stuck in their homes during the coronavirus pandemic.

Profits dipped to $542 million in the fourth quarter, compared with $587 million in the same period in 2019. But overall revenue in the quarter surged 21.5 percent to $6.6 billion.

For the full year, Netflix added a record 37 million paid memberships, according to the earnings report.

"We're enormously grateful that in these uniquely challenging times we’ve been able to provide our members around the world with a source of escape, connection and joy while continuing to build our business," Netflix said in a letter to investors.

Paid membership increased 23 percent in the final quarter of 2020 when compared with the same period a year earlier, but average revenue per membership was flat, according to the Silicon Valley based company.

While Netflix raised rates slightly in the US late last year, the majority – some 83 percent – of its new subscribers were from outside North America, the earnings report indicated.

READ MORE: The Netflix decade: How one company changed the way we watch TV

Netflix has invested heavily in original shows and films to make itself a must-have service in the increasingly competitive streaming television market.

Apple, Comcast, Disney and others have taken on Netflix with streaming television services of their own

"The big growth in streaming entertainment has led legacy competitors like Disney, WarnerMedia and Discovery to compete with us in new ways, which we’ve been expecting for many years," Netflix said in the letter.

"This is, in part, why we have been moving so quickly to grow and further strengthen our original content library across a wide range of genres and nations."

Netflix executives said its productions are back up and running in most regions after being derailed by the pandemic.

Netflix boasted having more than 500 titles in post-production or being readied for release on the service, with the plan being to launch at least one new original film weekly.

Already the master of the pandemic-era movie landscape, Netflix last week offered a preview of upcoming 2021 releases, a list with no fewer than 70 star-studded feature films.

From drama, comedy and science fiction to horror and even Westerns, the slate will take in every major film genre before the year is out, with some releases poised as potential competition for major awards.

Among the most-anticipated titles is "Don't Look Up," from filmmaker Adam McKay of "The Big Short" and "Vice" fame and starring Leonardo DiCaprio.

"The Harder They Fall," a Western co-produced by Jay-Z and with a primarily Black cast including Regina King and Idris Elba, also promises to be one to look out for.

The announcement – via a brochure on the streamer's website – was accompanied by a short video presented by "Wonder Woman" star Gal Gadot, "Jumanji" lead Dwayne Johnson and "Deadpool" actor Ryan Reynolds.

Johnson, Gadot and Reynolds will appear in "Red Notice," an action film with a $160 million budget, according to US media. 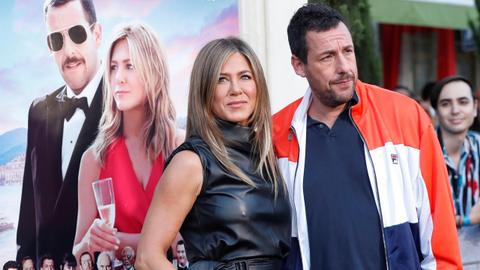