Turkey and the EU mark the fifth anniversary of the 2016 refugee deal, which aims to prevent the refugee influx into Europe.

Turkey and the European Union mark the anniversary of their refugee deal on March 18, one that aims to prevent an influx of refugees, especially Syrians, into Europe.

After a series of meetings, Turkey and the EU signed an action plan in 2016 with an aim to stop the heavy inflow of irregular migrants who take the road to the EU via Turkish land and sea.

There have been several disagreements in recent years over the deal as Turkey complained about the EU failing to adhere to its promises.

So what does the agreement offer? What are the complaints about the deal by both parties? And, what will be expected in the future over the refugee issue?

Here are the answers to all these questions.

What is the refugee deal?

According to the deal, “all new irregular migrants crossing from Turkey to the Greek islands as of 20 March 2016 will be returned to Turkey.”

As per the deal, one Syrian refugee can be resettled in the EU in exchange for every Syrian being returned to Turkey from the Greek islands.

Turkey is responsible for controlling and guarding new sea or land routes in order to keep irregular migrants en route to the EU at bay.

The EU pledged to allocate €6 billion($7.3 billion) in financial assistance until 2018 for the Turkish government to finance projects for Syrian refugees. Moreover, working to improve humanitarian conditions inside Syria is another element approved by the parties involved in the deal.

Apart from the clauses related to refugees, parties have reached an agreement over lifting the visa requirements for Turkish citizens with regards to entrance into the Schengen area by the end of June 2016.

Turkey also agreed to “take all the necessary steps to fulfil the remaining requirements” on the visa liberalisation roadmap.

What were the contradictions in the deal?

Turkey has repeatedly complained that the EU failed to allocate the full €6 billion as pledged, as well as seeing through other promises it made.

"We have made invaluable contributions to the security of the entire European continent, particularly to the Balkan countries. However, we did not see the support and humanitarian attitude that we expect from our European friends during this difficult time," Turkish President Recep Tayyip Erdogan said in July 2019.

However, last December, the EU announced that it had finished giving the money that it pledged in 2016.

“The EU Delegation to Turkey signs the final eight contracts under the Facility for Refugees in Turkey [FRIT] this week. Under the contracts, the EU provides €780 million in support to refugees in terms of basic needs, health care, protection, municipal infrastructure and vocational and technical education, and training, employment and support to the private sector, SMEs and entrepreneurship,” said the EU Delegation to Turkey in a statement.

However, Erdogan said in February that the monetary assistance promised by the EU had still not been fully released.

“While the EU gives Greece €3 billion [$3.65 billion] for 100,000 refugees, it did not shoulder its responsibility for 4 million refugees in Turkey,” he added.

Last year, in March, Turkey opened European borders to refugees after warning of the posed risk to them and other migrant situations getting out of control.

The perpetual silence of the international community, and its evident inability to intervene to end the massacre, has emboldened the Assad regime to continue spilling the blood of unarmed civilians in Idlib.

Ankara has unequivocally rejected this, as the refugee problem is one shared by the entire international community.

Ankara ordered the Turkish police, the coast guard and border security officials not to stop the flow of refugees by land and sea to Europe, especially following the climax of the Syrian regime and Russian attacks on Idlib.

However, three weeks later, Turkey closed its borders for refugees after several meetings with European leaders. The coronavirus pandemic was also to blame.

German Chancellor Angela Merkel told Erdogan she was willing to increase the European fund to refugees.

Has immigration to Europe decreased?

Since the deal, the number of irregular migrants entering Europe has significantly decreased thanks to Turkey’s efforts to prevent refugees who try to cross its borders into Europe. The investment to develop infrastructures for about four million refugees has also helped.

"It has led to a significant decrease of loss of human lives, a reduction in irregular crossings and improved the situation of refugees and migrants in Turkey," Borrell said on Monday following a joint meeting of EU foreign affairs and interior ministers.

Turkey hosts nearly 4 million refugees, more than any other country in the world. It has been a key transit point for asylum seekers aiming to cross into Europe to start new lives, especially those fleeing war and persecution.

The EU should renew an agreement with Turkey that helped stem the influx of migrants into the bloc five years ago, Turkish Deputy Foreign Minister Faruk Kaymakci told AFP on Wednesday.

"Without our efforts, more than two million people would have reached EU countries by now," Kaymakci said.

Athens is expected to push the bloc to impose targeted sanctions at the March 25-26 EU summit - they would punish Turkey for its eastern Mediterranean energy push.

"Unfortunately, all the dimensions of Turkey-EU relations, including the migration management is taken hostage by the Greek Cypriots' and Greece's irrational and maximalist demands on Turkey," Kaymakci said.

"I sincerely hope that the upcoming European Council summit will opt for setting a positive agenda between Turkey and the EU... to the benefit of all members of our European family," he said.

On the other hand, the EU foreign policy chief Borrel has recently said the bloc will seek the renewal of the 2016 refugee deal with Turkey. 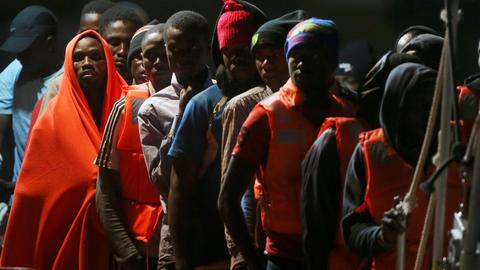