US President Biden is under increasing pressure to extend an August 31 deadline to pull out American forces, with Britain to lobby at a virtual G7 summit for a longer presence.

Evacuation is being conducted on a "war footing" at Kabul airport as foreign forces try to meet an August 31 deadline to leave Afghanistan, a NATO diplomat said.

Taliban officials have been briefed about the evacuation and logistical process at the airport, the NATO official said on Tuesday.

The official said while the situation outside the airport was relatively calm better crowd management was still required.

US troops led an increasingly desperate effort on Tuesday to airlift thousands of people out of Kabul, after the Taliban warned they would allow foreign forces to carry out evacuations for just one more week.

US President Joe Biden is under increasing pressure to extend an August 31 deadline to pull out American forces, with Britain to lobby at a virtual G7 summit on Tuesday for a longer presence.

About 50,000 foreigners and Afghans have fled the country from Kabul's airport since the Taliban swept into power 10 days ago.

But crowds continued to mass outside the airport, with Afghans terrified of facing life under the Taliban.

I did see a lot of people leave. The flow of Afghans was more orderly and there were large numbers. But outside 1000s of Afghans are stuck - others don’t feel safe to make the trip to the airport. pic.twitter.com/FzAGtMklFZ

Many fear a repeat of the brutal interpretation of sharia that the Taliban implemented when first in power from 1996-2001, or retribution for working with the US-backed government over the past two decades.

"The Taliban are the same as they were 20 years ago," Nilofar Bayat, a women's rights activist and former captain of Afghanistan's wheelchair basketball, said after fleeing and arriving in Spain.

"If you see Afghanistan now, it's all men, there are no women because they don't accept woman as part of society."

Perhaps the Taliban have changed but for the tens of thousands who have left/leaving, they will never know. A transitional govt would have allowed Afghans to see for themselves and assess risks before leaving. We will need decades to recover from this exodus. This is on Ghani

The Taliban, who ended two decades of war with an astonishingly swift rout of government forces, had been publicly tolerant of the evacuation effort.

But on Monday they described next week's cut-off date as a "red line".

"If the US or UK were to seek additional time to continue evacuations – the answer is no... there would be consequences," spokesman Suhail Shaheen told Sky News on Monday.

He said any foreign military presence beyond the agreed deadline would be "extending occupation".

The Taliban achieved their stunning victory thanks to Biden's decision to accelerate a deal forged by his predecessor, Donald Trump, to pull out nearly all American troops from Afghanistan.

However he was forced to redeploy thousands of troops after the fall of Kabul to oversee the airlift.

Biden and his top aides have repeatedly insisted they are aiming to stick to their August 31 deadline.

But European and British leaders are calling for more time.

Germany also said it was in talks with NATO allies and the Taliban to keep Kabul's airport open for evacuations beyond August 31, while France said "additional time is needed to complete ongoing operations".

The rush to leave Kabul has sparked harrowing scenes and left at least eight people dead.

Some of have been crushed to death and at least one, a youth football player, died after falling off a plane.

The German defence ministry said on Monday an Afghan soldier was killed and three others wounded in a firefight with unknown assailants.

Taliban seek to form government as resistance brews in Panjshir

The Taliban are currently working on forming a government, but two sources within the movement told AFP there would be no announcement on a cabinet until the last US soldier has left Afghanistan.

The Taliban have repeatedly claimed to be different from their 1990s incarnation, and have declared an amnesty for government forces and officials.

But an intelligence assessment conducted for the United Nations said militants were going door-to-door hunting former government officials and those who worked with US and NATO forces.

In the capital, the former insurgents have enforced some sense of calm, with their fighters patrolling the streets and manning checkpoints.

But they are also intent on quashing the last notable Afghan military resistance to their rule, made up of ex-government forces in the Panjshir Valley, north of the capital.

The Panjshir has long been known as an anti-Taliban bastion.

One of the leaders of the movement, named the National Resistance Front, is the son of famed anti-Taliban commander Ahmad Shah Massoud.

Another is Amrullah Saleh, a vice president and head of intelligence in the fallen government.

The Taliban have said they have massed forces outside the valley, but would prefer a negotiated end to the stand off. 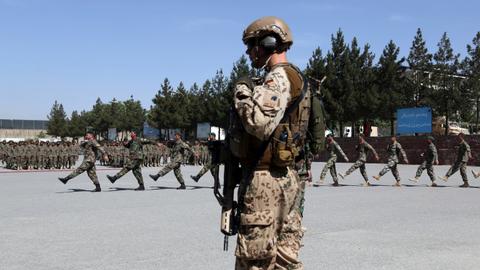