More aid flights from UAE and Qatar will arrive in Pakistan today, and a Turkish train carrying relief goods for flood victims was on its way to the flood-hit nation.

The death toll surged past 1,200, officials said on Friday, with families and children at special risk of disease and homelessness.

The delegation conveyed President Recep Tayyip Erdogan's heartfelt condolences for the loss of precious lives and destruction of valuable property during the recent monsoon flash floods.

So far 11 Turkish military aircraft and two “Goodness Trains” have been dispatched.

Sharif also recalled Türkiye’s steadfast support and assistance to Pakistan after the 2005 earthquake and 2010 floods, describing the two countries as "two hearts, one soul" that have always supported one other in difficult times.

The Turkish minister added that in line with President Erdogan's directives, Türkiye's relevant institutions and organisations dealing with natural catastrophes are ready to provide expanded assistance in accordance with Pakistan's requirements.

The Second Kindness Train is on its way to Pakistan🚂🚋🚋

Aid organizations including Kızılay deliver emergency supplies to Pakistani people who are affected by monsoon floods through the "Kindness Train".
🌐https://t.co/DGQvKfBIQC pic.twitter.com/NKJ3222Hp9

The ninth flight from the United Arab Emirates and the first from Uzbekistan were the latest to land in Islamabad overnight as a military-backed rescue operation elsewhere in the country reached more of the three million people affected by the disaster.

Two more planes from UAE and Qatar with aid will arrive in Pakistan later on Friday, and a Turkish train carrying relief goods for flood victims was on its way to the impoverished nation, according to the Foreign Ministry.

Multiple officials blamed the unusual monsoon and flooding on climate change, including UN Secretary-General Antonio Guterres, who earlier this week called on the world to stop "sleepwalking" through the deadly crisis.

Guterres will visit Pakistan on September 9th to tour flood-hit areas and meet with officials.

READ MORE: Fear of waterborne diseases in Pakistan as floods begin to recede

Pakistan's Foreign Ministry said in a statement on Friday that the planes brought food items, medicine and tents. Sharif had planned to travel to UAE on Saturday, but he postponed the trip to visit flood-hit areas at home.

So far, Pakistan has received aid from China, Saudi Arabia, Qatar, Türkiye, Uzbekistan, UAE and some other countries. This week, the United States also announced $30 million worth of aid for the flood victims.

Earlier this week, the United Nations and Pakistan jointly issued an appeal for $160 million in emergency funding to help the 3.3 million people affected by floods that have damaged over 1 million homes. 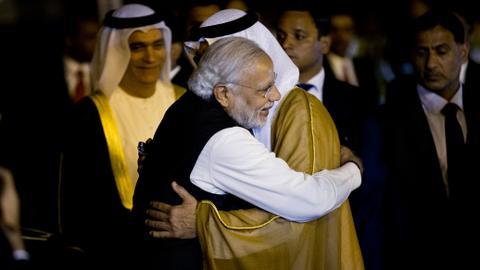 UAE gives its backing to India over Kashmir treaty revocation