British Prime Minister Boris Johnson has stirred a backlash after inaugurating a JCB backhoe and excavator factory in the Western Indian state of Gujarat, just a day after authorities illegally demolished mainly Muslim-owned properties and a Mosque entrance in New Delhi with bulldozers made by the same British company.

Amnesty India campaign group slammed the British PM in a series of tweets on Thursday, calling his silence over the human rights violations against Indian Muslims under the right-wing government "deafening."

"In the backdrop of Municipal Corporation of Delhi using JCB bulldozers to raze down shops of Muslims in Northwest Delhi's Jahangirpuri yesterday, UK Prime Minister's inauguration of a JCB factory in Gujarat is not only ignorant but his silence on the incident is deafening," Amnesty India said.

JCB is a British digger firm owned by a Tory donor.

In another tweet, the rights body urged the UK government not to remain silent as Indian authorities clamped down on human rights.

"It must bring human rights to the discussion table. India cannot wait another day for justice. These brazen attacks on the right to livelihood and adequate housing of religious minorities in India is an attack on their hopes for a secure future."

In the backdrop of Municipal Corporation of Delhi using JCB bulldozers to raze down shops of Muslims in Northwest Delhi’s Jahangirpuri yesterday, UK Prime Minister's inauguration of a JCB factory in Gujarat is not only ignorant but his silence on the incident is deafening.
1/4

In his first visit to New Delhi as prime minister, Johnson will discuss boosting trade and security ties with the South Asian country that buys more than half of its military hardware from Russia.

The rights group said the demolition of Muslim homes and shops came despite an order of the Supreme Court of India, which will resume hearing on the matter after two weeks.

Indian political analyst Sushant Singh told The Telegraph those working in PM Johnson's office "are clearly unaware of the major human rights controversy over the use of JCB machinery in the bulldozing of Muslim homes and businesses in states ruled by Mr Modi’s Bharatiya Janata Party [BJP] and in India's capital."

"Inaugurating a factory which is producing machinery seen to target Muslims at the behest of Mr Modi does not set a good image for Mr Johnson or the United Kingdom in India."

READ MORE: Razing of Muslim homes in India could amount to 'collective punishment'

Seems like @BorisJohnson's visit is now turning increasingly tone-deaf. Visiting a plant of the JCB company while its bulldozers are being used to illegally terrorise Muslims? Someone at @UKinIndia failed to do their job. Only way Johnson can salvage this trip is by speaking up. https://t.co/W42Zb72DC2

'Justice should be equal for all'

Opposition parties and activists in India have criticised the "selective" demolition drive carried out by the Hindu-nationalist Bharatiya Janata Party (BJP)-controlled North Municipal Corporation in the violence-hit locality in the capital city of Delhi.

But critics say more than 70 percent of New Delhi's properties are built on encroached land and Muslims were deliberately targeted by the right-wing government.

BJP says the demolitions were not related to religion or retribution.

The incident came soon after several Muslim homes and shops were torn down in the central Indian province of Madhya Pradesh and Gujarat states following communal clashes.

Authorities say they want to remove illegal stores in Jahangirpuri, where clashes broke out between Muslims and Hindus over the weekend near a mosque and temple in which several people, including police officers, were injured.

Residents said fighting broke out on Saturday when a crowd of Hindu worshippers, some carrying sticks and knives, moved through the area during a Hindu religious festival. At least 20 people were arrested.

The area was peaceful during riots that swept parts of India in 2019 and 2020, in the country's worst communal clashes in decades over India's new citizenship law that Muslims said discriminated against them.

Now residents fear those tensions have reached them.

An imam, who declined to be named, said the mosque where he worked had been damaged during the clearance operation.

"Justice should be equal for all, they have broken parts of the mosque and not touched the mandir," he said through the mosque's gate, referring to the nearby Hindu temple.

READ MORE: Indian Muslims are now a ‘memory of a nation falling apart in its amnesia’

What is unauthorised in Delhi? Delhi govt's only public data source says only 23% of its residents live in “planned colonies”.

77% live in what is called “unauthorised.”

Please ask Mr Iqbal and his counterparts in the other two MCDs to go ahead and demolish 75% of Delhi. 2/n https://t.co/HFjLQlcnPA

Similar clashes in other parts of India have been followed by demolition drives, which critics say are an attempt by Prime Minister Narendra Modi and his Hindu nationalist BJP to intimidate India's 200 million Muslims.

Since Modi came to power in 2014, Hindu mobs have lynched scores of people — mainly Muslims and Dalit Hindus — suspected of illegally transporting cows or consuming beef.

Hindu far-right groups have also targeted Muslims over "love jihad", the conspiracy theory that Muslims are luring Hindu women with the aim of conversion and eventually national domination.

During a Hindu festival earlier this month, Hindu mobs pelted stones on mosques in several areas while DJs played loud music outside the mosques as worshippers prayed.

Hindu monks known for their incendiary anti-Muslim rhetoric have been calling for Rohingya-type ethnic cleansing of Indian Muslims. 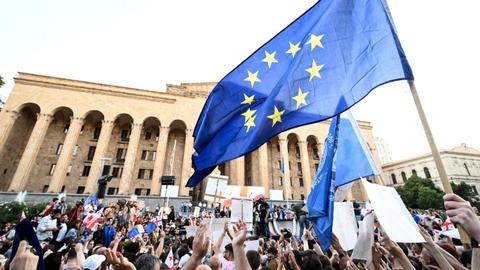 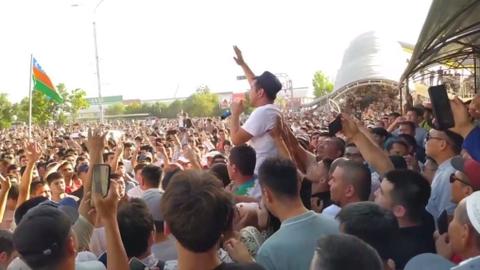 There are 'fatalities' in Karakalpakstan region: Uzbek President Mirziyoyev