Recent clashes between Azerbaijani and Armenian forces over the occupied Karabakh region started on September 27. The two sides went to war over the territory after the USSR collapsed in 1991, resulting in an estimated 30,000 deaths.

Azerbaijan's foreign minister will meet international mediators over the country's conflict with Armenia, as deadly fighting over the occupied Nagorno-Karabakh region has entered a second week.

France, the United States, and Russia are co-chairs of the Organizaton for Security and Co-operation in Europe's (OSCE) Minsk Group, which mediates over Nagorno-Karabakh.

Meanwhile, Russian President Vladimir Putin has called for the fighting in the Armenian occupied Nagorno-Karabakh region to stop and said that the Moscow-led defence pact with Yerevan does not apply to territory outside Armenia.

Calling the conflict a tragedy Putin in his interview on Wednesday emphasised that Moscow would fulfill its obligations within the Collective Security Treaty Organisation (CSTO), which analysts sometimes describe as a Russian NATO.

But pointedly, he noted, "The hostilities, which to our great regret, continue to this day, are not taking place on the territory of Armenia."

Russia has so far kept its distance in the conflict as other troubles mount, such as the protests in neighbouring Belarus, the poisoning of opposition figure Alexey Navalny and now unrest in Kyrgyzstan.

It has cordial relations and arms cooperation with both sides. But it has a military base in Armenia and Yerevan is a member of a Russia-led regional security group while Baku is not.

Armenian PM Pashinyan told AFP he was confident Russia would come to its aid due to the two countries' membership in the CSTO.

Putin will continue his dialogue with Azerbaijan's President Ilham Aliyev about the Nagorno-Karabakh conflict after the two leaders spoke briefly by phone on Wednesday, Kremlin spokesperson Dmitry Peskov said.

Speaking to reporters on a conference call, Peskov said Aliyev had called Putin to congratulate him on his 68th birthday and that the two men had used the opportunity to discuss the conflict.

Putin and Aliyev had not spoken since fighting between Azerbaijan and Armenia erupted on September 27.

Azerbaijan earlier said it thwarted an Armenian missile attack on the Baku-Tbilisi-Ceyhan (BTC) oil pipeline as the conflict around the occupied Karabakh region continues to escalate.

Azerbaijani prosecutors said on Wednesday that Armenian forces attempted an attack on the pipeline in Yevlah at around 0500 GMT on Tuesday.

The BTC pipeline delivers light crude oil, mainly from the Azerbaijani-Chirag-Guneshli field, through Georgia to Turkey's Mediterranean port of Ceyhan for export via tankers.

Azerbaijan described the attack as a "terrorist act" and highlighted the pipeline's important role in Europe's energy security.

Turkey on Tuesday called for the world to back Azerbaijan in the conflict over the Nagorno-Karabakh region.

Turkish Foreign Minister Mevlut Cavusoglu made the comments during a visit to Azerbaijan, after Russia, the United States and France on Monday called for an "unconditional" halt to the fighting.

"To put these two countries on equal footing means rewarding the occupier," the Turkish foreign minister said. "The world must be on the side of those who are right, namely on the side of Azerbaijan."

Cavusoglu dismissed international calls for a ceasefire, saying, "They have been making the same call for nearly 30 years."

'Fighting until the end'

Azerbaijani Foreign Minister Jeyhun Bayramov told journalists after a meeting with Cavusoglu that there was no hope of a ceasefire until Armenian troops withdraw from Karabakh.

"We will be fighting until the end."

The conflict has expanded in the last few days with shelling on big cities, including the regional capital Stepanakert and Azerbaijan's second-largest city, Ganja.

The two sides have reported a total of 286 deaths since the fighting erupted, including 46 civilians, but the real figure is expected to be much higher.

Most of the confirmed deaths are from the Armenian side, which has reported 240 fatalities.

READ MORE: Could the Azerbaijani-Armenian conflict spill over into Iran?

Turkey’s Foreign Ministry spokesperson on Wednesday criticised a decision by the European Court of Human Rights (ECHR) to take interim measures against the country at the request of Armenia, which is locked in a conflict with Azerbaijan.
Hami Aksoy said in a statement that the ECHR’s move dealt a blow to its credibility and reputation as it lacked a judicial basis and the court did not even consult with the Turkish government.
The ECHR’s decision was based on political, not judicial reasons, said Aksoy, adding the court was not aware of the realities on the ground.

READ MORE: Why the Minsk Group is unable to address the Azerbaijan-Armenia conflict

Relations between the two former Soviet republics have been tense since 1991, when the Armenian military occupied Upper Karabakh, an internationally recognized territory of Azerbaijan.

Multiple UN resolutions, as well as international organisations, demand the withdrawal of the invading forces.

The OSCE Minsk Group, co-chaired by France, Russia and the US, was formed in 1992 to find a peaceful solution to the conflict, but to no avail. A ceasefire, however, was reached in 1994.

Many world powers, including Russia, France and the US, have urged an immediate ceasefire. Turkey, meanwhile, has supported Baku's right to self-defense. 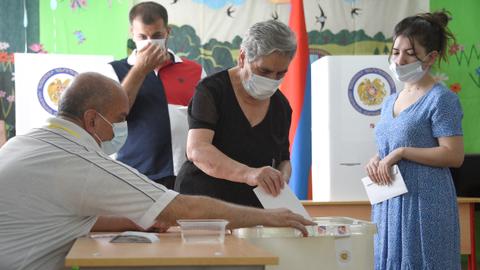