Bangladesh says over 8,000 Rohingya refugees willing to return to Myanmar

The return of Muslim Rohingya to Myanmar is part of a repatriation deal made between the two countries last year. But many refugees are reluctant to shift back to Myanmar where a brutal army crackdown forced tens of thousands from their homes.

Bangladesh says more than 8000 Rohingya refugees are willing to return to Myanmar as part of a repatriation deal made between the two countries last year.

The process has been delayed after Rohingya refugees refused to return, and the UN has warned that Myanmar hasn't yet guaranteed rights for the Rohingya.

Still thousands of Rohingya continue to flee to Bangladesh.

Myanmar insists it's ready to take back the Rohingya, but many refugees are still gripped by fear.

Mohammed Osman is a Rohingya leader who says he's seen photos of the new reception centres Myanmar has built for them.

"I don't like the look of those camps. We don't trust the Myanmar government. They will take us back and kill us," he said.

But Bangladeshi officials in charge want to stick to the deal.

Mohammed Shamsud Douza of the Refugee Relief and Repatriation Commission said, "We have to motivate them and tell them that they will be better in that place. We have a land hungry country. Already one million people have been added to our population."

The International Organisation for Migration says the number of Rohingya who fled to Bangladesh since late August now stands at 688,000.

The exodus began when the Myanmar military launched a brutal crackdown following insurgent raids on security forces on August. 25. 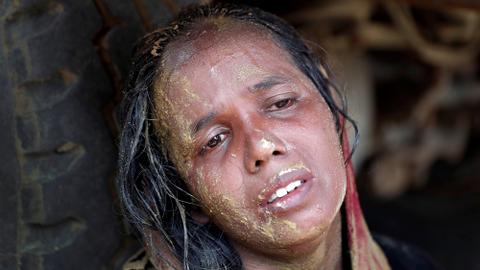