More than 7,600 people, many of them rescued from flooded villages, were taking shelter in evacuation centres.

At least one person has died and five are missing as Fiji was battered by a tropical cyclone for the second time in a month.

Cyclone Ana, a Category Two storm, slammed into the South Pacific island nation on Sunday with winds up to 140km/h and heavy rain, causing widespread flooding.

The National Disaster Management Office (NDMO) said a 49-year-old man drowned while four fishermen and a three-year-old boy were missing.

More than 7,600 people, many of them rescued from flooded villages, were taking shelter in evacuation centres.

Heavy rain continues in the North. This is at Soasoa, Labasa today. More people are being assisted to safety by our first responders on the ground. #TCAna pic.twitter.com/lgYEQMy6c2

Local media reports said the three-year-old went missing when he accompanied his grandfather to check their boat, which was stuck in mangrove plants.

NDMO director Vasiti Soko said people continued to ignore warnings against venturing out during the storm.

"We are in the midst of a cyclone with widespread flooding throughout the country, yet we continue to receive reports of members of the public, adults and children alike wandering around," she said.

"They should be mindful of the risks they place themselves and members of the Fiji police force deployed to rescue them when there is a mishap."

In December, four people died and 23,000 people fled their homes when super cyclone Yasa, a top-of-the-scale Category Five storm, flattened entire villages with wind gusts of up to 345 kilometres an hour. 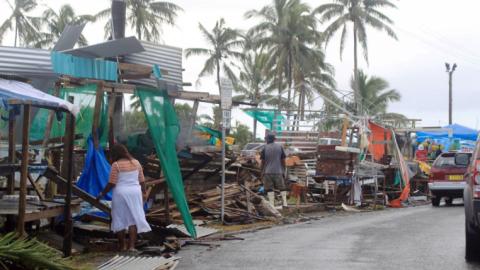